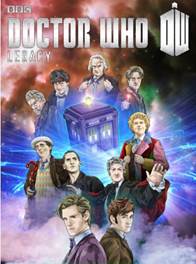 This month, the world welcomed Peter Capaldi as the 12th Doctor, in the 8th season of BBC’s Doctor Who television series.  To mark the occasion, I’d like to introduce you to the fantastically fun, free-to-play, mobile game app, Doctor Who: Legacy, from Tiny Rebel Games.  On the surface, this is a mild mannered match-3 style game, but like many things in the Doctor Who universe, take a closer peek and this game is much more than it first appears.  You could even say that it’s bigger (and better) on the inside.  It’s jim-jam packed with all the faces of the Doctor, loads of clever companions, and more of the Doctor’s enemies than you can shake a sonic screwdriver at.  So, jump on into this app today, celebrate the last 50 years of Doctor Who, and doff your fez to the beginning of the next 50.  Geronimo!

Doctor Who: Legacy is a game of matching gems, but also a game of battling enemies.  In each episode of the game, which corresponds to a featured storyline from different seasons of the television show, you’ll be presented with a game board filled with different colored gems.  You’ll need to match at least 3 gems of the same color to eliminate them from the board and reveal new ones.  Every gem you remove from the board will wrack up points, which are then used as ammunition against the foe of that episode.  In a typical matching game of this kind, you’re normally allowed to switch a gem/candy/etc. with one of its neighbors in order to create matches.  But as I stated, this game is more than meets the eye.  You can drag your chosen gem to, not just a neighboring space, but any space in the entirety of the game board, like having a tiny, gem-transporting TARDIS inside your fingertip.  As you move the gem around the board, every other gem it passes over will switch places with it, creating a long chain reaction.  You’ll have to land you little gem eventually and, in fact, your move is timed.  When you either lift you finger, or the time runs out, your gem will remain in place.  If you have matched it with like-colored gems, they will all disappear, turning into enemy thwarting points.  Because you switched places with more than one gem in your trek across the board, you may even find you’ve been able to match several different strings of different colored gems, adding up to quite a lot of points indeed.  Clever you! 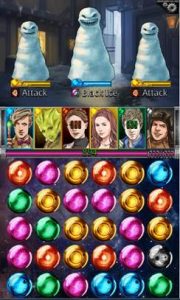 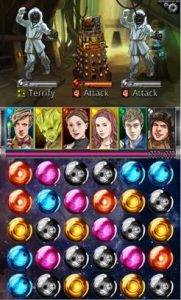 Now, the colors of the gems do more than just look pretty.  When you start the game, you’ll have access to the 11th Doctor, and several companions from Season 7 of the television show, each having an association with one color, as well as unique special abilities.  As you defeat enemies and complete episodes, you’ll collect more companions and Doctors.  You can choose 5 companions to create a team with one version of the Doctor, customizing your lineup to make use of their unique special abilities.  To get points from the matched gems, you’ll need to have a companion, or Doctor, with a corresponding color.  I like to have 2 companions who share a single color, so that when I match gems of that color, I get double points!  The special abilities of each team member are charged as you match their color of gems, and can be used when they’re fully charged and flashing.  Some abilities heal your team members, some hurt your enemies, and some have an affect on the gems.  Play around with different team configurations until you find your favorite.  There are 5 save slots so you can have quick access to a variety of lineups.  As you match gems of corresponding colors to each team member, they will gain XP, which will eventually allow you to increase their level, making them stronger assets to your team.  Also, each enemy is more vulnerable to a particular color, and you can target single enemies if you choose. 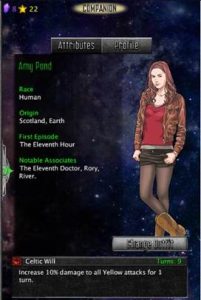 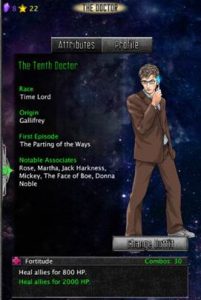 So far, you can play Season 7, Season 6, and Season 5, starting with 7 and traveling back in time.  There are also Specials, Expert Levels, Challenge Levels, and the Fan Area, which all offer many more hours of fun if the main game storyline isn’t enough for your ravenous Doctor Who appetites.  You can replay levels as much as you want as well, in order to gain XP for your team members, or collect more companions and Time Fragments.  Higher-level team members are needed to beat the later, harder levels.  During some episodes, you’ll get dialogue from the Doctor and his companions, or enemies, furthering the storyline along.  During each episode, in addition to new characters, there are other items that you’ll win as you defeat enemies.  Most common will be different types of Time Fragments, which you must collect in order to rank up your team members and allow them to continue leveling up.  On the rare occasion, you might even win a new outfit for one of your companions or Doctors.  You might also, on an even more rare occasion, be rewarded with a Time Crystal, which is used as currency to purchase things in the store.  If you just can’t wait to win all of these things during game play, you can purchase Time Fragments, companions, Doctors, and outfits in the store with Time Crystals…which you can purchase with actual money.

Unlike the Doctor, I don’t have all of time or space to detail every wonderful aspect of this game.  Besides, half the fun of having a new game is discovering some of its secrets on your own.  So, run your fingertips over to the Apple App Store, Google Play, or Amazon App Store, and download Doctor Who: Legacy to your mobile device today.  It IS free after all, so there’s really no reason not to.  You can even play on Facebook if you like, though I prefer it as an on-the-go pleasure.  What are you waiting for?  It’s time for an adventure.  Allons-y!