I’ve checked out a bunch of subscription box services lately, and even gave one an Editor’s Choice last year, but there’s only one service to which I keep returning for more.  Loot Crate, arguably the most popular of the pop-culture subscription boxes, consistently delivers top-quality merchandise at a very reasonable price.  This service is, in my mind, at the top of the stack of many, many competitors.  Each month, the “curators” of the loot piece together a theme for their crates, with stellar collectibles both off-the-shelf and exclusively made for Loot Crate subscribers.  The awesome themes this year have included Fantasy, Heroes, Villains, and Rewind.  The crates themselves are even themed along with the goodies, and you can always fold the sides of the boxes inside out to reveal artwork that ties in to the treasures held within. 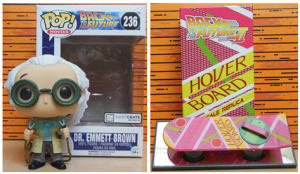 This month’s theme was Time, and paid homage to 3 time related franchises, most notably Back to the Future.  If you somehow managed to miss the geeky clamoring over it this month, October was the 30th Anniversary of Back to the Future, and also the exact time that Marty McFly traveled to in the 2nd movie.  October 21, 2015 was the official Back to the Future Day, and I was so excited to receive my Loot Crate on that very afternoon.  This month was all about quality over quantity, with only 4 items included, but all of which were absolutely worth the subscription cost.  The 2 Back to the Future items were both exclusive to Loot Crate.  The Funko Pop! vinyl figure of Doc Brown and the 1:5 scale model of Marty’s hover board were superstars of the crate.  Also included were an awesome t-shirt designed after Bill & Ted’s Excellent Adventure, and a Sonic Spork paying tribute to Doctor Who. Each of these items was high quality and sure to please any Looter.

Looters, the official term for Loot Crate subscribers, are a loyal and friendly group.  I’ll be out and about at the mall, or at a festival, wearing one of my super cool Loot Crate t-shirts, and all of a sudden I’ll hear “Loot Crate!” being shouted from a few feet away.  I’ll look up and someone is pointing at my shirt with a giant smile on his face.  On occasion, usually the day or so after a crate has arrived, that person will be wearing the same shirt.  I’ll smile back, often with a “Yes!” and we give each other a thumbs-up, walking away with a geeky satisfaction of sharing a moment with another member of the club.  It might sound strange that a mail order grab bag of random goodies can bring people together, but it really does make you feel like you’re part of a bigger community.  If you’d like to become a Looter too, head on over to www.lootcrate.com and subscribe today. 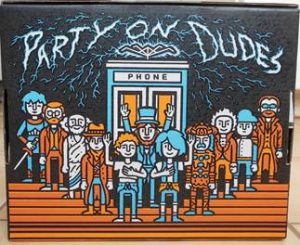 There are multiple ways to become a Looter, from a month-to-month subscription all the way to a full year commitment.  The longer your subscription, the better price you get per crate, starting with a month-to-month subscription at $13.95 per crate, plus shipping.  Each month, the theme of the crate is announced before ordering starts, so if you like to go month-to-month like I do, you can choose which themes you want to order, and which you’d like to skip, but you miss out on the long-term discount.  In addition to the main subscription, recently Loot Crate has added the Level Up option.  This is a bonus subscription that you can add on to your existing one, giving you an additional item of socks, accessories, or apparel, depending on the level of Level Up you choose.  These add-ons start at $9.49 per month.  The goodies don’t even end there!  Every Looter with an active subscription is entered into the monthly drawing for a Mega Crate, which consists of high-end items like gaming consoles and accessories, scale replicas, and clothing.  Whichever option you choose, as soon as you receive your first Loot Crate full of geeky goodies, you’ll be hooked on this service as much as I am.  If you still aren’t convinced, check out some of the past crates at www.lootcrate.com, or watch some of the un-boxing videos on You Tube, and see what you’ve been missing.