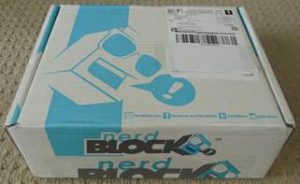 Oh no!  December is here, Christmas is officially right around the corner, and you still don’t know what gift to get that special geek in your life?  Lucky for you I’ve found the perfect solution, a mystery box subscription service called Nerd Block.  You’ve undoubtedly heard of subscription box services, since they seem to be everywhere lately, containing a wide range of products, from food, to jewelry, to gadgets.  But forget all of those other boxes; Nerd Block has the best type of products of them all.  They cater to the discerning tastes of geeks, nerds, dorks, fanboys, fangirls, and any other term that describes lovers of all things super cool from pop-culture.  Though their name sounds like something you’d spray on to keep nerds away, their boxes are actually filled with a plethora of branded goodies from comics, television, movies, and video games, sure to satisfy the collectible needs of any nerd on your shopping list.

What?  You’ve really never heard of subscription box services before this very moment?  Have you lived under a rock in the Bat Cave all your life? Never fear, Nerd Block is here to help.  Just go to www.nerdblock.com to subscribe, pay a modest monthly fee, and receive a box full of unknown treasures in the mail every month.  Every box contains a t-shirt designed exclusively for Nerd Block, one or two additional exclusive items, and an assortment of other treats.  You may wonder why anyone would pay for stuff when they have no idea what they’ll get.  But that’s half of the fun!  Sure, you could go to the store and pick something off a shelf, or you could be adventurous and enjoy the mystery of the unknown.  The items in the Nerd Block boxes are all so cool, you won’t be disappointed with the surprise.  For instance, the October Nerd Block overflowed with a t-shirt starring Jay and Silent Bob as Batman and Robin, a sheet of Jay and Silent Bob stickers, a set of 4 Marvel vs. DC buttons, a notebook full of sticky notes in an Arkham Asylum cover, replicas of the vintage Captain America trading card set that Agent Colson owned in the Avengers movie, an adorable Zelda zipper dangler, and an awesome, exclusive, Deadpool Pop! vinyl figure.  Check out this treasure trove in the first photo below.  The November Nerd Block contained a Deadpool t-shirt, a Boba Fett car decal, a plush Batman or Robin, a mug with an Iron Man comic panel on it, and an exclusive Super Mario Bros ghost slap watch.  Gaze in wonder at these goodie in the second photo below.

Now, you can’t possibly read that list of swag and not think that your special nerd or geek will go nuts for Nerd Block.  The price is right too, at only $19.99 a month, for all that stuff!  You can cancel anytime you like, so there’s not even any commitment pressure.  Why not treat someone special, or even your own nerdy self, to a slightly different, and amazing gift this year?  Plus, if you buy a multiple month subscription, it’ll be like Christmas comes every month.  There are even more choices of mystery boxes from Nerd Block too.  There’s Nerd Block Classic, which I’ve been describing, that is touted as Comic-Con in a box, the Arcade Block with all video game related gear, the Horror Block with, you guessed it, horror themed goodies, and a Nerd Block Jr. Girls/Boys with toys geared for a younger crowd.  So, if you wanted, you could get a Nerd Block for every person on your shopping list.  All of the Nerd Block varieties are $19.99 a month, plus shipping, except the Nerd Block Jr., which is $13.99.  Starting in January, Nerd Block will be even better than ever!  In the past, a mystery box would contain a random, though always fantastic assortment of surprises, but Nerd Block will start the new year by adding themes to their Nerd Block Classic boxes, so each shipment will be a perfectly chosen bundle of seamless geeky treasures.  You might notice that they tested this out with the October box.  They’ll even let you know ahead of time what the theme will be, so you can get extra excited about your upcoming box, and entice your friends to get their own boxes too.  I can’t wait to see what comes in my next Nerd Block!  If you want to learn more about your Nerd Block options, or jump right in and sign up for a subscription, just go to www.nerdblock.com and get started.