Bingo Blitz, from Buffalo Studios, is a Facebook game that has taken up many hours of my time.  At first glance, it may seem like a simple game of Bingo, but there’s so much more fun to be had when you actually start playing.  The game has garnered close to 3 million players, connecting to new users every day, and continues to make updates to keep the game fresh for regular visitors.  Daub numbers, win collection items, make friends in chat, and compete in daily tournaments for cool rewards.  With exciting features like power-ups and treasure chests to unlock, you’ll never want to stop daubing. 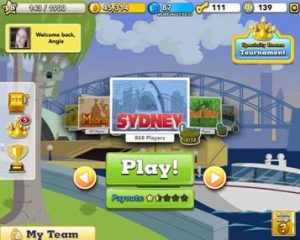 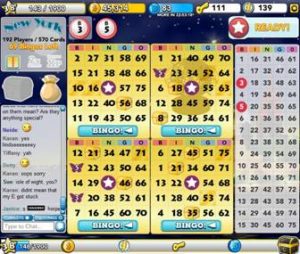 There are many different Bingo rooms to choose from, most of which are themed after cities form around the globe, like New York, London, and Sydney.  You’ll gain access to more cities as you increase your level.  Of course, each higher ranking city charges an increasing amount of Bingo credits for each card you wish to buy, up to 4 cards per game, but you’ll also win higher reward amounts too.  You are awarded a set number of credits each day when you log in, and can also win them my calling Bingos, leveling up, or on a winning pay line in the daily slot spin.  Once you’ve bought your cards, off you go daubing numbers as they’re called, by a voice accented to match the city you’re playing in.  For each 3 numbers you match, you’ll earn the chance to use one of your power-ups.  You can win these or purchase them with in-game coins in the store.  There’s a variety of useful power-ups like a free daub on each card, extra coin or treasure chest spaces on each card, or double experience points.  Once you use a power-up, you’ll have to wait a short cooling down period before new daubs will start counting towards the next power-up.  If you daub a number with a treasure chest behind it, you’ll get a chance to open it at the end of the game, as long as you have enough keys in stock to fit each chest you’ve collected.  You can win keys or buy them in the store next to the power-ups.  Chests might contain credits, coins, keys, experience points, or very rarely, a collection item.  This is a fast paced game, so keep your eyes open for a Bingo, because there’s a limited number of Bingos that can be called in each game.  This limit is based on how many people are in a room at that time.  Fortunately, you’ll see a countdown of how many Bingos are left to be called, so you can hurry up and hit Bingo if you were keeping a card open for a chance at more coins or chests.  You’ll also get bonus rewards if you’re one of the first 3 people to call a Bingo, so you might want to watch out for that. 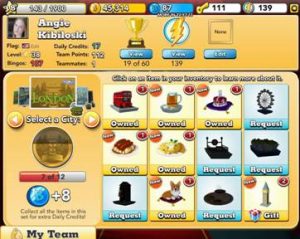 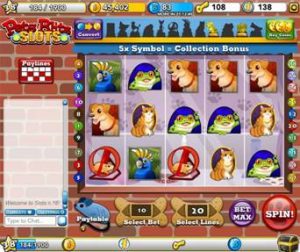 Collection items are the big prizes of Bingo Blitz.  Each city has a total of 12 collection items themed for that city.  Most of them must be won by calling a Bingo on a card with a shadow of that item on it.  These shadow cards won’t come up in every game you play, but frequently enough to keep you engaged.  The exact shadow you get is random, and I have never had more than one shadow card in the same round.  Some collection items can be bought for coins in the store, and others must be requested from other players.  Complete a collection set for bonus rewards like extra daily credits.  There are rooms you can play in other than the regular cities as well, each with its own collection set.  Each day you can play 5 free rounds of the Daily Tournament.  You’ll still spend your own keys and power-ups, but it won’t cost you credits.  If you rank in the tournament, get ready to reap some rewards, and even a few special collection items if you rank high enough.  Be sure to come back the next day to collect the coins you earned in your 5 rounds or you’ll lose them.  Play in the Pets Blitz Slots room for coins and a special collection set.  Once you level up high enough, you’ll unlock the Blackout room, which of course has you making a Bingo pattern of every single number on the card.  Sometimes, for holidays or the start of a new season, a special limited time room will open, and you can try to complete your collection for extra special rewards before the room closes again.

All of the cool features in this game add up to make this a really fun way to spend some gaming time on Facebook.  You can even make it social, and invite your friends to be on your Bingo team to collect bonus credits and work together to complete team goals.  You can chat with the other players in your room too, if you want to trade collection items or just congratulate the winners.  I love trying to make a Bingo on the shadow cards by using all the power-up tricks, and it is very exciting when I’m rewarded for my efforts with a new collection item.  Check the game out for yourself, and see why I, and millions of other fans worldwide, am so addicted to Bingo Blitz.