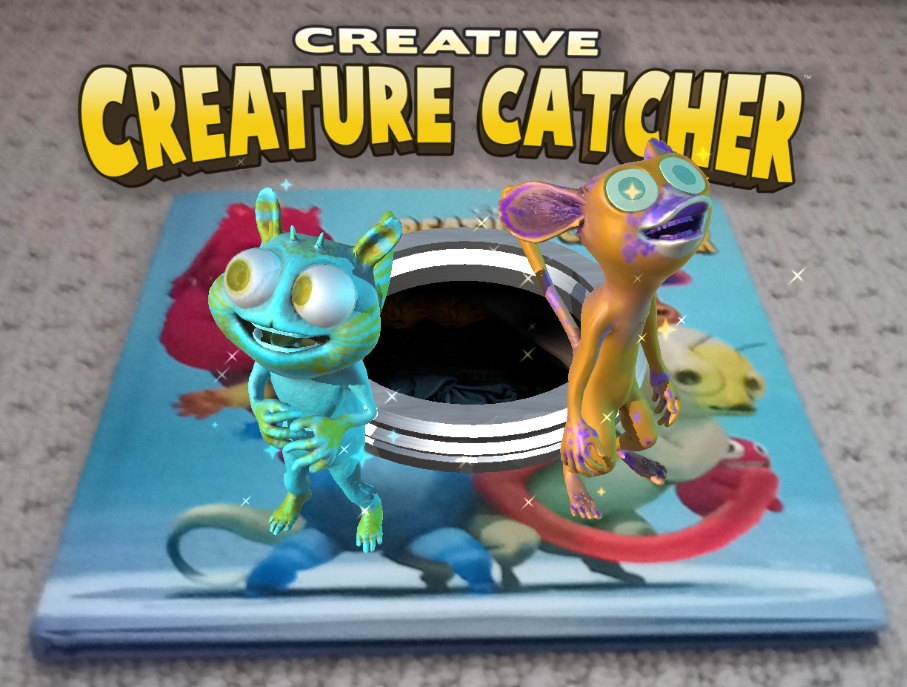 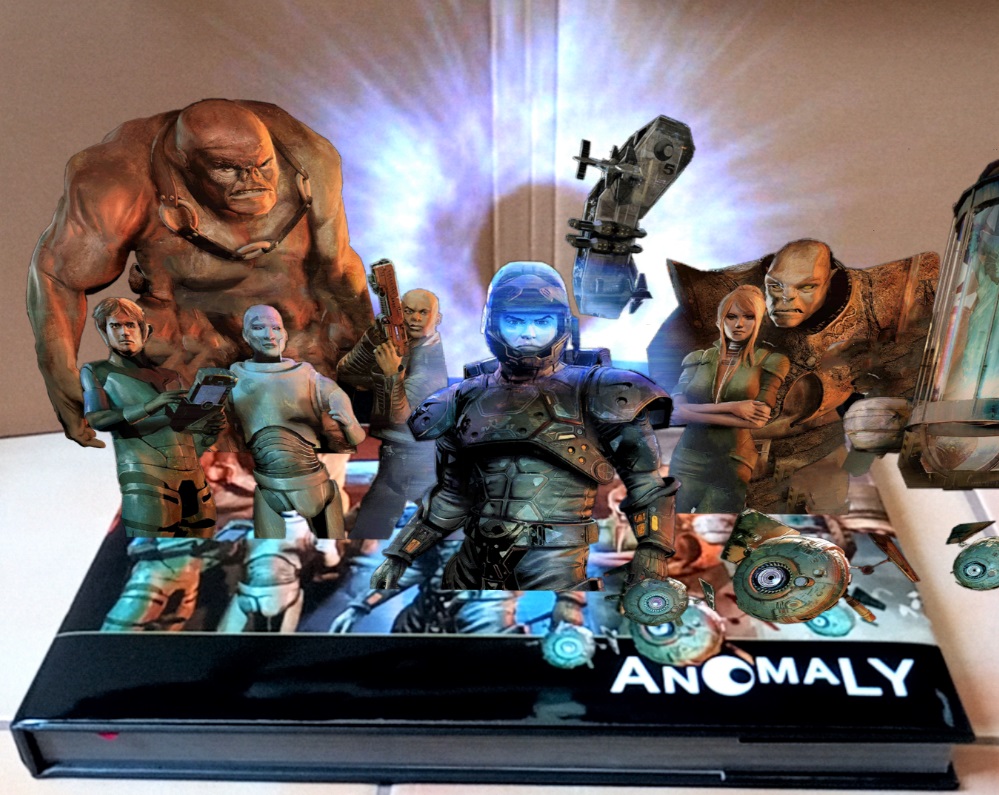 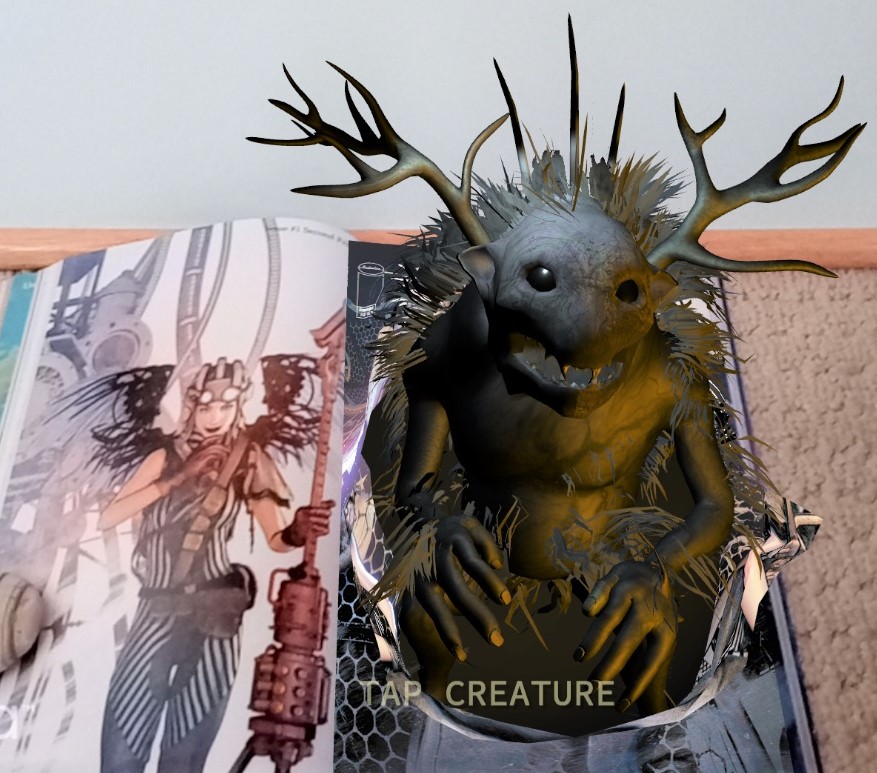 There’s nothing better than a good book, but what if characters and things from that book could jump off the page and be interactive?  Arguably, this would be a better book.  Anomaly Productions publishes books, which are already filled with stunning images and compelling stories, and pairs them with AR mobile apps, which bring content to life in a 3D, interactive way.  Each of their library of quality books has its own AR app, with a variety of very cool additional content.  The apps are always free, even new and updated content, included with the price of the original book purchase.  I got a chance to experience 3 books from their catalogue, and would like to share them with you now.  I encourage you to check them out for yourself, as well as all the other titles from their line. 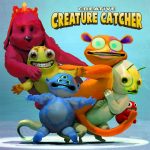 We’ll start with an adorable kids’ title, Creative Creature Catcher ($19.99).  The book on its own is super cute, featuring an adventurous kid named Malcolm, who introduces you to an assortment of fantastic creatures that might be hiding around your house.  He’ll teach you all about where they come from, what they eat, their behaviors, and more.  These sweet, colorful critters got lost in our world and need some help to get home.  When you download the app, you can be the one to help them.  You’ll be able to scan certain pages of the book with the app, and either Malcolm or one of the creatures will appear on your screen, standing up off of the page surface.  You can move your phone or tablet up, down, and around, and be able to see them from every angle, as long as the surface of the page is still visible by your device’s camera.  Some of the creatures you can touch on your screen, and they’ll do something, like make a noise or move around.  To help them home, you’ll need to catch them by tapping the screen, and sending them off through a portal.  The fun doesn’t stop there, though, as there is more to do in the app without the need for the book.  You can find creatures hiding behind objects in your own home, by playing a game of Hide ‘N Seek, or learn more about them in the CCC Manual.  The illustrations, by Geirrod Van Dyke, are playful, colorful, and fun.  The story, by Brian Haberlin, is simple and cute, geared perfectly for beginner readers.  Read more about Creative Creature Catcher the book, then check out some screenshots and features of the app for Android and iOS. 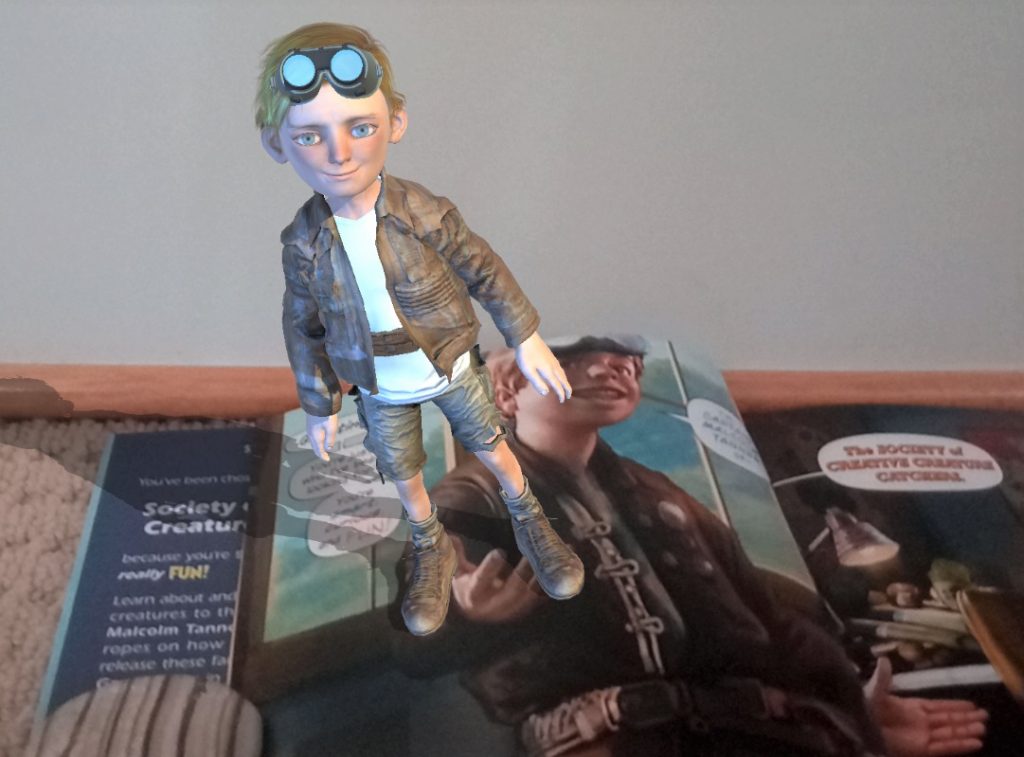 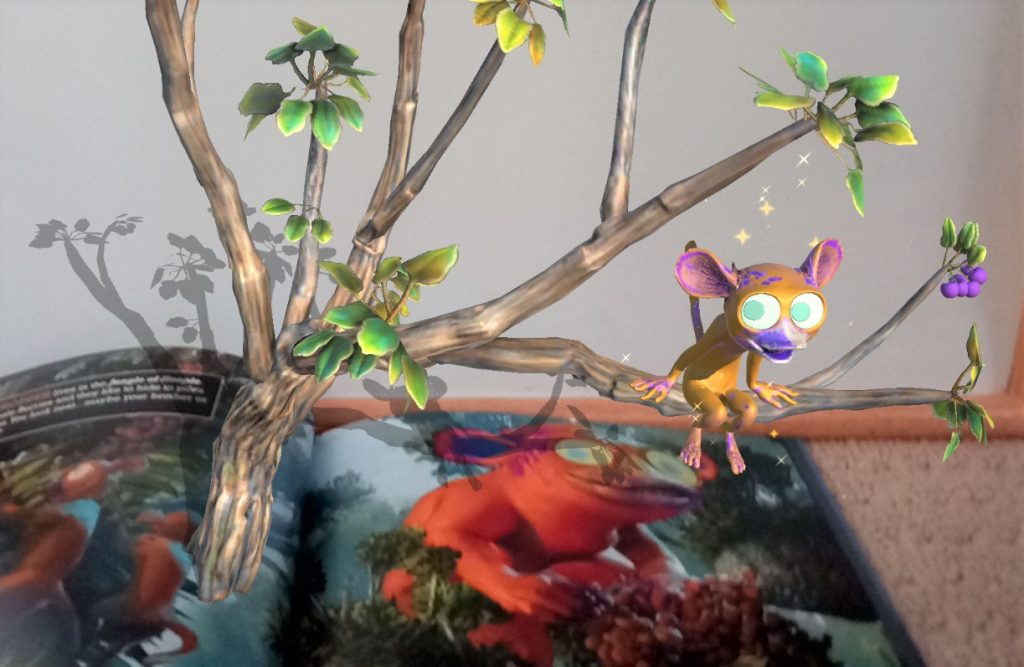 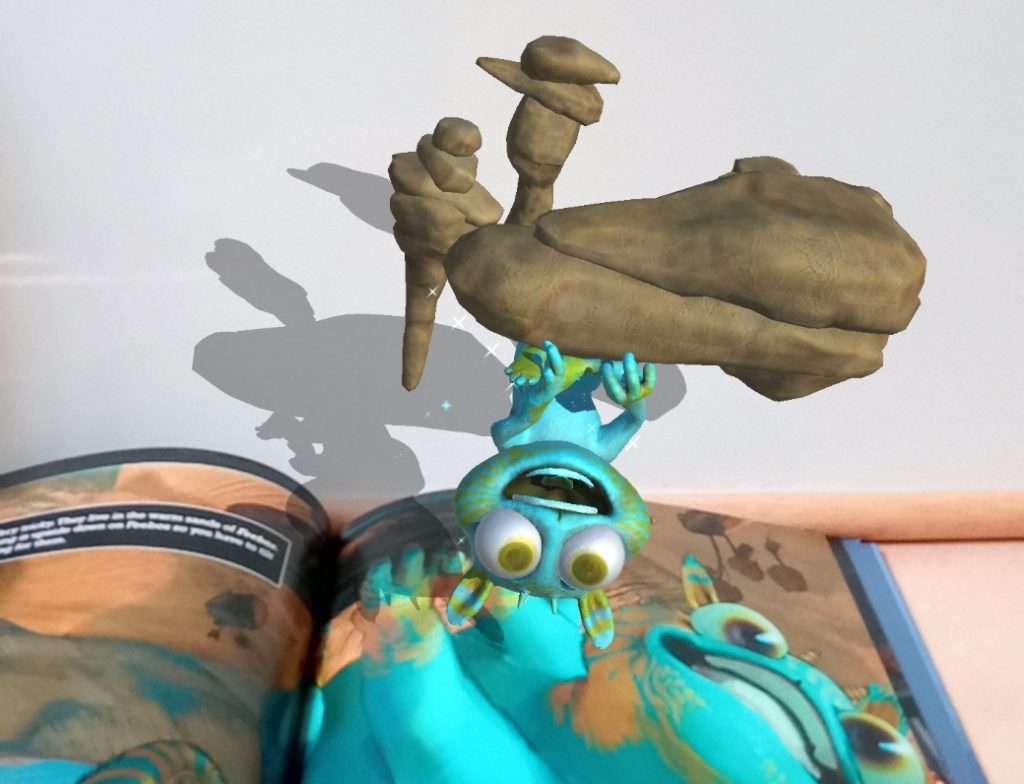 The next book I want to talk about is truly awesome, and one of their flagship titles, simply called Anomaly ($75).  It’s a giant, hardcover graphic novel, which makes for a stunning coffee table book.  At 10″ x 15″, filled with 368 shiny pages, it’s certainly an eye catcher.  Even if you don’t use the app, the sci-fi adventure within the pages is compelling, presenting interesting characters, diverse worlds, complex relationships, and intergalactic politics.  Anyone who enjoys sci-fi, as well as the graphic novel format, will revel in reading this behemoth.  The story is set in the early 28th Century, where humanity has been forced off Earth, to harvest resources from other planets and stars.  Civilization is “united” by one corrupt and all-powerful agency, The Conglomerate, which controls every aspect of life.  The central character, Jon, is ex-military, now trying to keep his family alive in the bowels of one of the off-world colonies.  His saving grace may be a mysterious mission The Conglomerate sends him on, ostensibly to protect Samantha, the daughter of one of the dignitaries.  Seemingly diplomatic in nature, the mission soon spirals out of control, marooning them on a hostile planet.  Jon and his team must try to survive and navigate their way through misadventure, all while layers of political intrigue are uncovered in the heart of The Conglomerate.  The app adds even more sweet sci-fi content, especially for the super sci-fi fan, who loves learning about the nitty-gritty of space technology and alternate civilizations.  Recently updated, there are more than 60 pages of extra content, providing backstory for alien species, technical specs for weapons and spacecraft, and more.  It was a pleasure just to read this book, but using the app with it brought me true joy and excitement.  I was like a little kid during some of the AR screens, eyes alight with wonder and appreciation for the mega cool things that were jumping off the pages, and sometimes jumping right at my face.  The book is a little pricey, but given its format and length, plus the added app content, it’s well worth it.  Check out Anomaly in book form, then look at some of the screenshots and app features for Android and iOS. 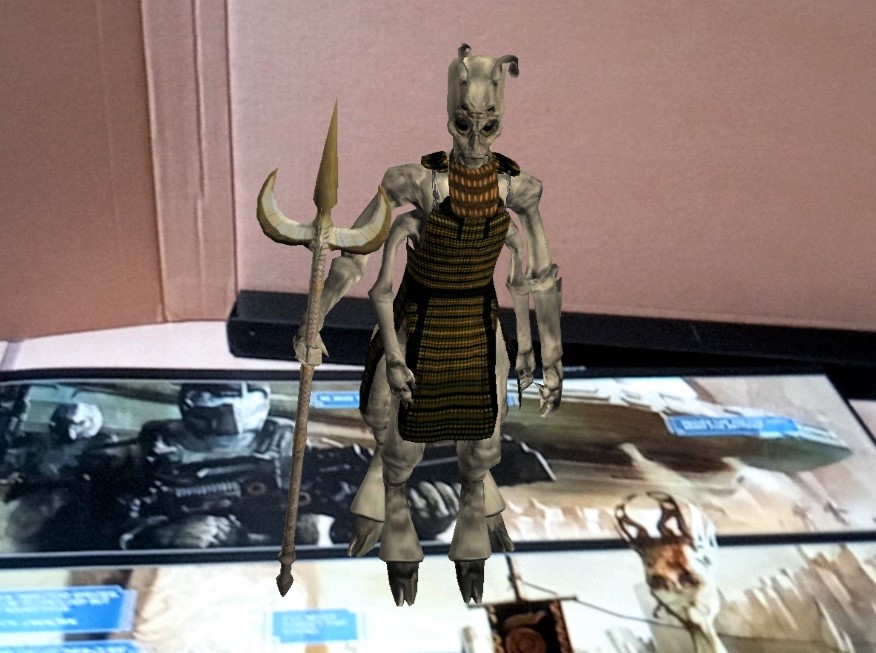 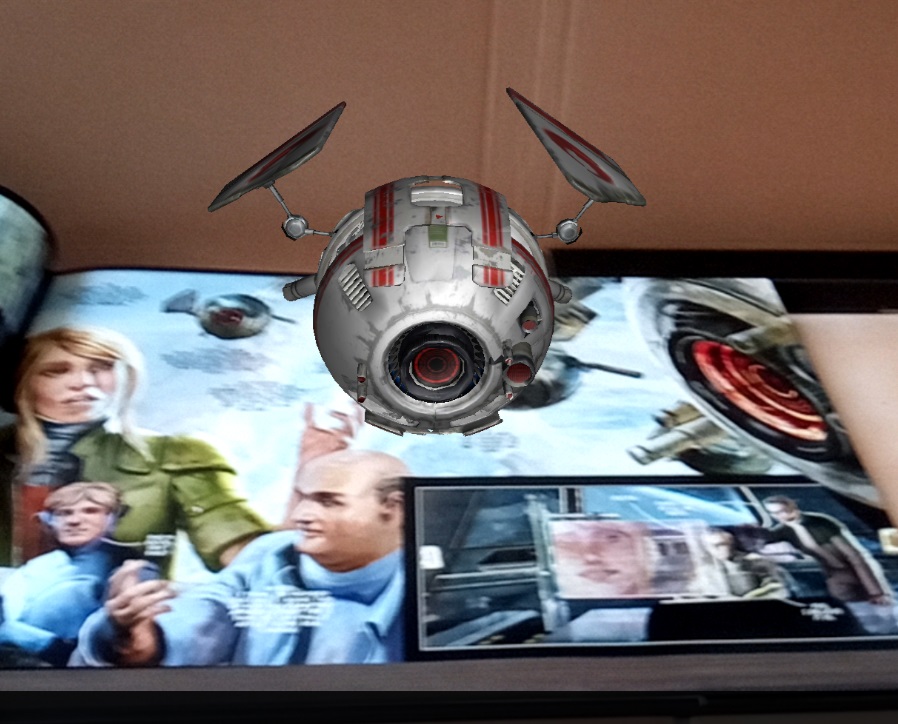 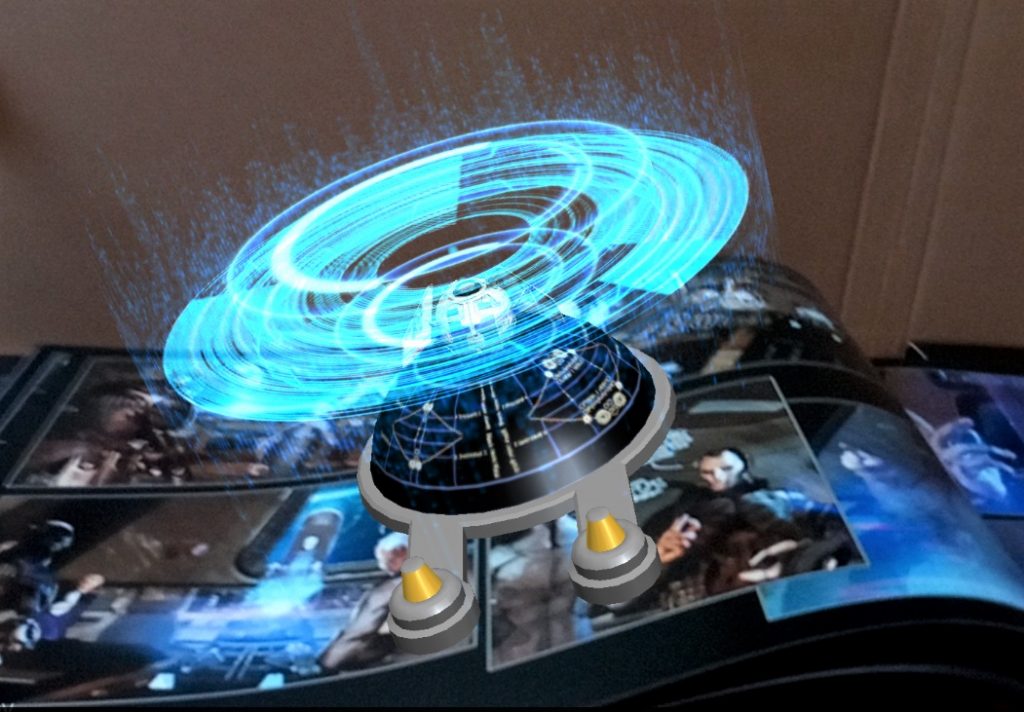 The 3rd book I had the chance to read was Sonata, or more specifically, Sonata, Volume One: The Valley of the Gods ($19.99).  This is a graphic novel compiled of the first 6 issues of the on-going Sonata comic book series.  Set on a planet in the far flung reaches of space, 3 cultures come together in both cooperation and conflict.  The native Lumani, the peaceful colonistic Ran, and the warlike invading Tayan, each with their own motives, must come to terms with both their differences and similarities, in order to have any sort of future on the sometimes hostile planet of Perdita.  Sonata is the young woman at the center of it all, bridging the divide between each culture, and discovering the secrets of the planet and their shared history.  In the app, most of the AR content consists of the various stages of storyboarding and comic development, though the covers of each issue offer other treats.  A couple had mini-games attached, though without game play instructions, they were a bit difficult to play, and a couple others had characters spring from the page.  Since this is a currently on-going comic series, more content will be added to the app with each new issue published.  To be honest, this was my least favorite app of the 3, missing out on the variety of content that the others offered. Check out Sonata in individual comic issue form on the Anomaly Productions site, or in compilation graphic novel form from their publishing partner Image Comics, then see everything the app has to offer for Android and iOS. 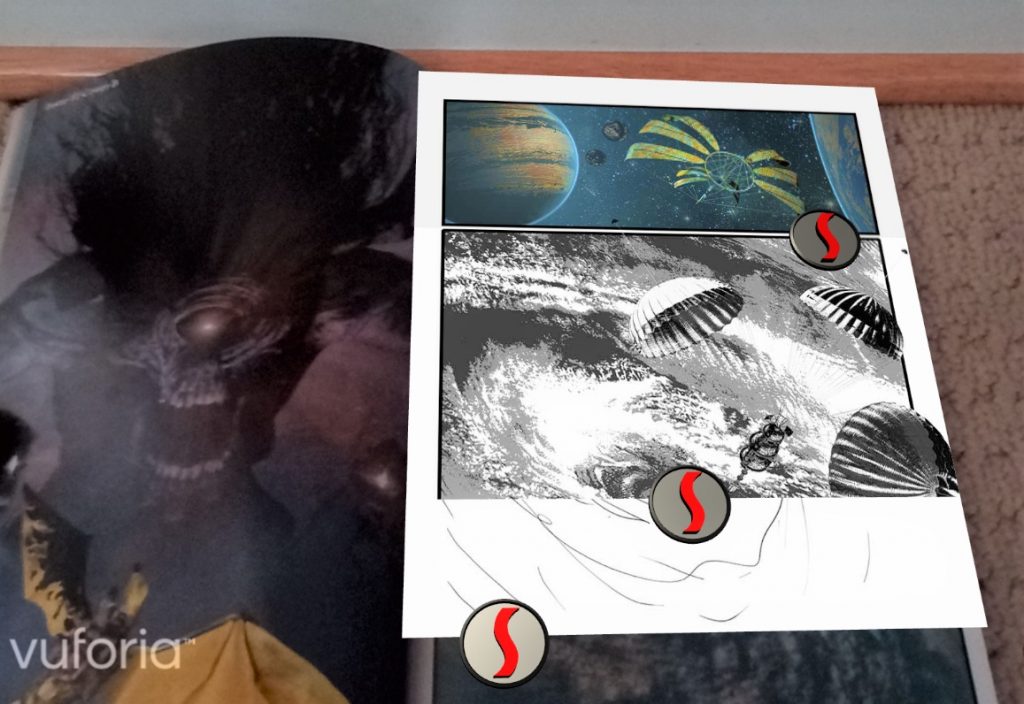 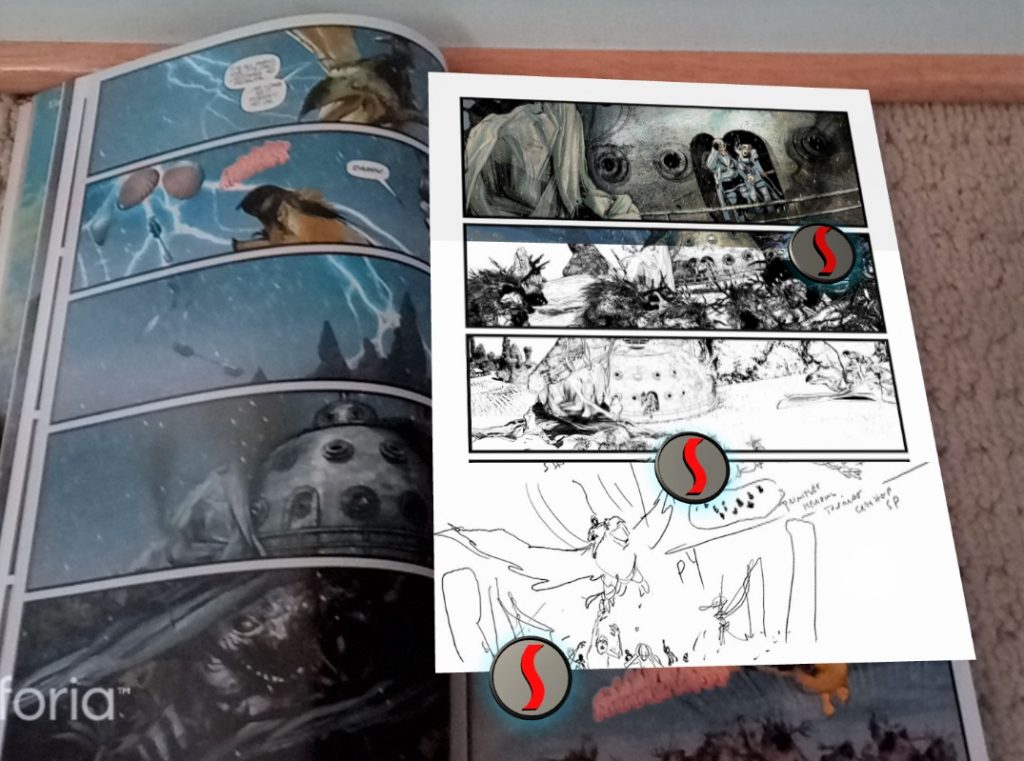 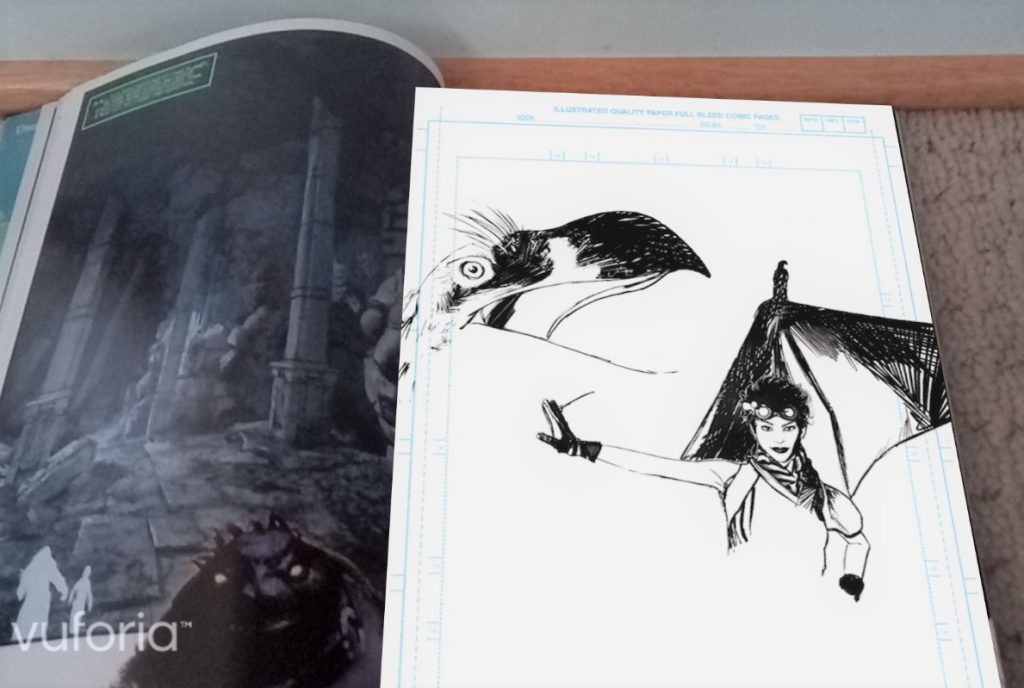 The creative partnership behind Anomaly Productions is Brian Haberlin and Skip Brittenham.  Haberlin is a comic book artist, writer, editor, and producer, with a storied history in the comic industry, working for some of the top publishing houses, with some of his artwork featured in the permanent collection at the Smithsonian Museum.  Brittenham is a senior partner at an entertainment law firm, and has spent his career working closely with powerhouse animation studios.  They’re joined by other amazing contributors across the various books, like writer David Hine, and artist Geirrod Van Dyke.  Together, they built a company that melds the old-school world of book publishing with our modern, app-connected tastes, with the goal to bring lovers of multiple media formats together under one immersive umbrella.

I’ve only highlighted 3 of the titles from Anomaly Productions, my favorite being the massive Anomaly coffee table graphic novel, but there are many more to explore.  By bringing additional AR content to each book with a dedicated app, these titles open up a whole new reading experience.  They give you the chance to become even more engaged with the story, and make it an interactive experience, not just a literary and graphic one.  The titles are mostly sci-fi or fantasy based, so if you love that genre, you’re sure to be excited by the combination of rich story telling and cool AR content.  Learn more about them all on the Anomaly Catalogue page, then order copies for yourself from their Store.