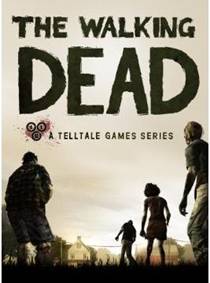 The Walking Dead (Retail download $24.99) from Telltale Games is an episodic series, which will be released over 5 months.  The complete set of 5 episodes is filled with action packed, zombie fighting fun and frights.  Any fan of the hit television show or ground breaking comic book series will absolutely love getting right into the action with this game.  You will become fully immersed into the world of The Walking Dead by taking on the role of a new character, Lee Everett, as he is thrown head first into the zombie apocalypse.  The events of the game happen before the timeline of the comic and television show, and you’ll encounter certain things that will foreshadow that story.  You’ll meet both new and familiar characters as you explore a variety of interesting environments, and make choices that will have a far-reaching impact on both you and the other people.  Talk to the other characters, fight the walkers with whatever weapons you can grab, and find out how well you would handle some very tough situations.  I was completely engrossed from moment one, played the first episode straight through, and still could have played on for hours if the next episode had been available.  I can’t imagine anyone who would not love this game. 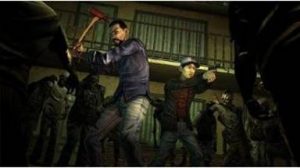 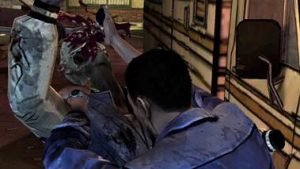 One of the awesome things about this title is that it has the potential to be replayed several times.  At nearly every turn, there are decisions you will have to make as the lead character.  Whether that is deciding which response to give to another character’s question, or making the impossible choice as to which person to save when walkers are attacking, each decision will have lasting and profound effects.  Some of these effects may be felt right away, and others won’t resurface until later in the series.  Characters will react differently to you depending on how you interact with them, and their future opinions and behavior will be direct results of how you have treated them.  For instance, Lee has a somewhat checkered past and you can choose how much of it to reveal, or not, to different people.  Do you lie and risk their trust, or do you take a chance that they can overlook some of the more unpleasant truths?  Also, characters might sometimes be on opposite sides of an argument, and you’ll have to decide which faction you’ll side with.  Each party will remember who you backed, and your choice could come back to bite you.  The most substantial choices you’ll have to make are those of the life and death variety.  If there are two people being attacked by walkers and you can only help one, they other will surely die, so which do you choose to save?  You’ll have to make a split second decision, which will have significant consequences for the rest of the game.  There is never really a clear cut answer to any situation, and most options will weigh heavily in the gray area of morality, so it all really depends on what kind of person you want to be in this brave new world.  All of your choices will come together to create a very individual experience for you, so your gaming reality may be very different from mine.  I find this to be an incredibly cool aspect of the game. 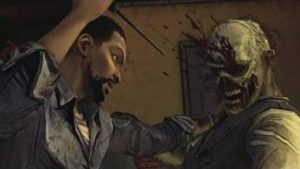 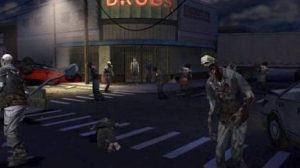 Not only will you be forming human relationships in each scene, and exploring the many detailed locations for useful items and plot points, you’ll also encounter some undead action on a regular basis that could pose a threat to your life and those of the people around you.  You’ll have to be on high alert for walkers and, if you should come across one, quickly look for a means of killing it before it rips your guts out…quite literally.  My poor character has actually had his guts ripped out, as well as his throat, and if I remember correctly, a piece of his face one time.  No worries if this happened to you though, because like all poor sods who get bit by walkers, you’ll come back!  Thankfully, you’ll come back not as a mindless member of the undead, but in the moments before your failed attempt at survival so you can try again.  Also thankfully, once you realize what you need to do in a scene, like where you have to aim your target or which sequence of buttons to hit, killing a walker is not that hard.  In fact, the overall game controls are pretty easy to figure out, and if you’d like some extra help, you can turn on the option to have on-screen prompts to let you know which buttons to push. 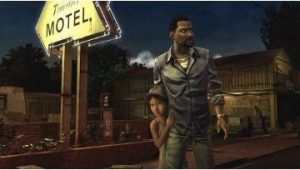 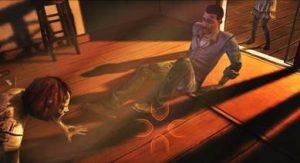 The animation has a very cool look, which is a huge tribute to the brilliant comic book series by Robert Kirkman.  The whole game looks like the pages of the comic have come to life and you’ve stepped right into the drawings.  The music and ambient sounds lend a perfectly tense atmosphere to every second.  Combine that with the action, suspense, and engrossing storyline and you get an exciting experience that will have you salivating for more.  Your heart will race, your adrenaline will pump, and you will not exhale until the credits roll on each episode.  This is a really fantastically done game and I am so excited to see where this series goes over the next several months.  Telltale Games, as always, you rock!  You can download the entire 5 episode series at www.telltalegames.com, from Steam, or from other online sources.  Available for PC, Mac, Xbox 360, and PS3.