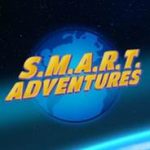 S.M.A.R.T. Adventures Mission Math ($4.99) is an educational game app for iOS and Android, from Kata Enterprises, Inc.  It takes the standards of 4th grade math concepts and turns them into fun puzzles, changing the chore of learning them into an adventure.  Someone has infiltrated Space Station Prime and sabotaged all the on-board labs, making a real mess of everything.  As Junior S.M.A.R.T. Agent Star, who you’ll get to customize at the start, you’ll have to solve all sorts of math problems to put things right again and track down the person responsible for the damage.  With a little help from some perky fellow Junior Agents, and a cheerful computerized assistant named Crunch, you’ll be able to add, subtract, multiply, and divide your way to victory in no time. 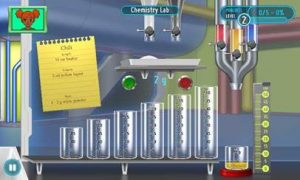 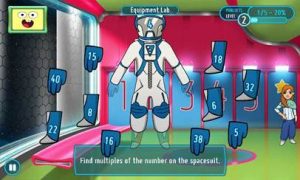 There are 6 different laboratories to enter, each with 3 levels of its own unique math puzzle.  The Biology Lab presents you with numbers of up to 10 place values, and you’re asked to determine which digits are in which places, like tens, hundreds, tenths, or thousandths.  This can get a little tricky with all of those “ths” if you aren’t careful!  In the Chemistry Lab, you must mix recipes correctly by measuring beakers in centimeters, liquids in milligrams, and powders in grams.  The Equipment Lab tripped me up a couple times, probably because I’ve been out of 4th grade for a while.  You must put together spacesuits by choosing which 2 gloves and 2 boots contain either multiples or factors of the number displayed on the suit.  In the Robot Lab, you have to rebuild a robot by finding which pair of wires creates a certain degrees of an angle, like 30°, 45°, 90°, or 180°.  The Gravity Lab is cute, and HARD!  Several talking flowers are floating near the ceiling, and you have to help them get down.  You’re given a chart of squares with some of them colored in.  You must choose the correct fraction and decimal methods of representing that graph.  For instance, 4 squares colored out of 8 would be written as either 4/8 or 0.5.  The Computer Lab was my favorite area, because it taught me a bit of a foreign language as well as math.  You must solve a math problem, and then connect the computer circuit to the correct Mandarin Chinese phrase that translates to the answer.  There’s a helpful key at the top of the screen for reference, but once you’ve done a couple of them, you might not even need it.  Very fun indeed! 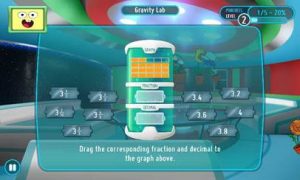 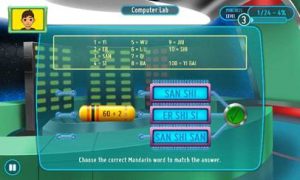 All throughout the game, as you finish levels in each lab, you’ll progress the small storyline as well.  There isn’t much of a plot, but that’s hardly the point of the game.  You’ll get clues as to who the saboteur is, and also find out a little about the S.M.A.R.T. agency and its members.  Some of those members will be your helpers in the various labs, walking you through tutorials and giving small hints when needed.  I found the 3 Junior Agent kids to be a bit annoying, but I’m sure they’ll be right up a 4th grader’s alley.  Crunch the computer, your 4th laboratory helper, was actually pretty cute.  You’ll also get communications from a few Senior agents to help move the story along.  When you finally uncover the identity of the saboteur, you’ll get to enter the Control Room, where you’ll use all of the skills you’ve learned to solve a variety of math problems and win the game.  When finished, you can always go back and play the lab games again, to further hone your math skills.

I found S.M.A.R.T. Adventures Mission Math to be a pretty fun way to refresh my own math skills, and feel that any 4th grader would love to dive into this learning adventure.  The math problems got more difficult with each level, so you could build on what you’d learned, and nothing was timed, so you could figure problems out at your own pace.  Also, if you get a problem wrong, you don’t even have to start the level all over again, and you don’t get a bad grade, you simply try again.  This sort of no pressure atmosphere, complete with the positive reinforcement from the other characters, makes this a relaxing and fantastic environment to practice, sometimes tricky, math concepts.  There are also no ads, in-app purchases, or links to external sites, so parents can feel safe downloading it for their kids.  You can find this app for download from the Amazon Appstore, Google Play, or iTunes App Store.  You can also check out the official app site at http://www.smartadventuresgames.com.