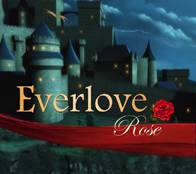 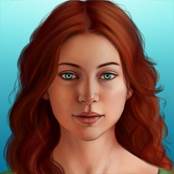 Everlove: Rose (Download $3.99) is a very cool app for iOS and Android, which is part game and part interactive novel.  From Silicon Sisters Interactive, this app combines romance and mystery into one intriguing story, with 4 variant plotlines, giving you complete control of which to follow, and how to behave while following it.  Any avid reader will, at one point in their reading lives, have wished to be able to guide the narrative of a story, and get the characters to do and say what the reader wanted.  By giving you multiple choices of conversation in each scene of this story, Everlove: Rose grants you that wish.

When you first meet the title character, Rose, she is seeing a therapist to resolve some personal issues.  Through past-life regression, the good doctor will take Rose back to a little medieval village called Heart’s Home, where she hopes to work out the mystery of the strange beast that visits Rose’s dreams.  You’ll begin to discover the origins of the beast, and get wrapped up in another intrigue, the death of past Rose’s father.  In each scene, or chapter of the story, Rose will converse with a variety of people, 4 of which are her possible love interests.  You’ll be given several choices of responses during the course of each conversation, and you’ll be given personality points based on which you choose.  These points will be put towards your total in categories like Wisdom, Kindness, and Romance, and will affect how characters react to you as well as your personality analysis back in the doctor’s office.  This analysis is a bit sketchy, since it changes with each path you take, but interesting nonetheless.  You’ll also be awarded hearts if you choose certain especially romantic options.  The number of hearts you have garnered for each of the 4 love interests may sway your decision on which path to follow near the middle of the game.  If you don’t like the way a chapter is playing out, or you want to change the response you chose, just back up in the conversation and make a different choice.  This is particularly helpful if you’re trying to get all of the available hearts for one of your 4 choices of men. 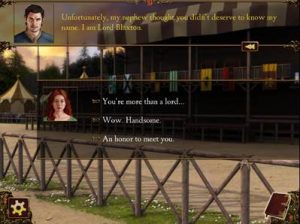 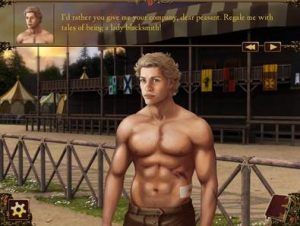 As to these men, I’ll bet there’s one love to satisfy all tastes.  There’s Warrick, the young, blonde, idealistic, yet untested prince.  He’s a bit arrogant, and kind of impulsive, but he has an innocent charm that can be sweet.  He has been Rose’s friend since childhood, and she retains fond memories of him.  Right alongside him is his uncle, Lord Blaxton, a powerful, successful knight who likes to have control of every situation.  He is undeniably attractive, and may hide a soft heart, but he can be arrogant as well.  I guess it runs in the family.  Another option from Rose’s childhood is her late father’s apprentice, Thorodan, a dark skinned, slightly shy, yet protective and goodhearted friend.  He has some mystery revolving around his actions in the story, and can be allusive, but is generally a nice fellow.  Finally, there’s my favorite of the 4, the swarthy rogue of a woodsman, and rebel leader, Garrett.  Who doesn’t like a bad boy, and a slightly misunderstood one at that?  He’s charming, dashing, and possessing just the right amount of swaggering self-assurance to make a girl’s knees go weak.

As you’re introduced to each of these 4 men, you’ll have a chance to get to know them a little before making your choice which to actively pursue.  When you choose, you’ll branch off into one of 4 parallel plot paths.  Each path follows the same basic storyline, but from a different perspective.  The current king is dying, and the inexperienced Warrick is next in line, unsure of his footing in his new role.  Lord Blaxton holds control of the royal army, and possibly wishes to control the throne as well.  Thorodan is the palace physician, and might be blamed for the king’s failing health.  Garrett is planning an uprising no matter who controls the throne, and harbors some ill will towards Lord Blaxton especially.  There is also the issue of your dead father, who was blamed for the queen’s death years before, and the beast who haunts Rose’s nightmares.  Occasionally, you’ll be taken to a hidden object screen where you’ll collect plants and scraps of paper.  When you put these scraps together like a puzzle, they will present some interesting plot points.  You can only share this knowledge with one person, and despite whose path you’re following, you can choose any of the characters after each discovery.  When following the path of one of the men, you’ll get a more thorough insight into his motives and character, and will uncover different facts about the story as a whole, depending on whom you’re with.  You must still choose your conversation responses wisely, as how you speak to your man will determine the success of your romance.  Once finished with the story, you’ll have the option to go back in and choose another path.  Each of the 4 paths will lead you to a slightly different conclusion to the story, and if you complete all 4 paths, you’ll unlock a special bonus chapter.  You’ll also be rewarded with some beautifully rendered, and sometimes racy illustrations along the way.  There are 8 illustrations to collect in total, 2 from each man, and well worth the effort to collect them all.  These, in my opinion, are a stronger incentive to finish all 4 storyline options that the hidden chapter. 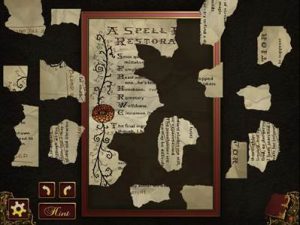 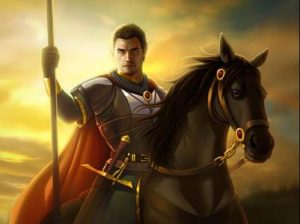 There is no voice acting in this app, but I didn’t mind that, since I could imagine any voice I wanted for the characters.  There is some fantasy style music that plays throughout, but I found this a bit distracting, and discovered the story more enjoyable with the music turned off.  I enjoyed this story so much that I plowed through all 4 storylines in 2 days.  I just couldn’t stop myself from delving into each of the romances and seeing how they would differ from the other 3.  Everlove: Rose does have a couple problems, like the fact that the biggest mystery in the story is never resolved, and the romances remain entirely in Rose’s past-life regression.  However, despite these issues, I cannot help but recommend this app to anyone who likes to read, wants to have a hand in the course of the story, and loves a good romance.  I hope Silicon Sisters Interactive has plans for another novel with a different title character, because I definitely want to see more like Everlove: Rose!