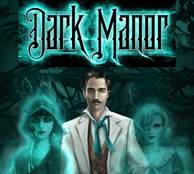 Dark Manor is a free-to-play hidden object title from Big Fish Games, available for download at www.bigfishgames.com.  Not only is it a quality hidden object game, with beautifully rendered graphics, it’s also a simulated world creation game, where you get to create your own spooky 1920’s mansion.  Access a variety of richly detailed hidden object scenes, unlocking more and more as you progress.  Collect coins for completing scenes to buy decorations for the outside of your New Orleans manor, which you’ve recently inherited from your Uncle Sterling.  Interact with the inhabitants of the property, like the groundskeeper and your uncle’s 2 ghostly former wives, to be given quests to complete.  The more you play, the more elaborate your manor grounds will become, and the closer you’ll get to unlocking all of the mysteries of your inheritance. 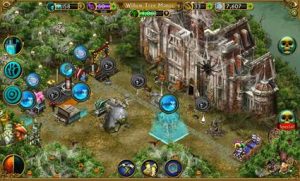 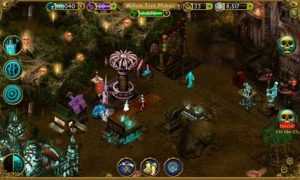 You’ll meet Uncle Sterling’s former wives first off, who will banter with each other while explaining the ins and outs of the game to you.  You’ll have to collect a bunch of ectoplasm during your hidden object quests in order for your uncle to finally appear to you himself.  These quests could consist of getting a certain number of points in a selected hidden object scene, expanding your manor grounds, or a number of other tasks.  In addition to ectoplasm, you’ll also gain coins and juju during your quests.  The coins you’ll use to purchase things for your manor, and the juju will be used to unlock more scenes.  The hidden object scenes are very cool.  You’ll need to use your mouse to drag the image around to see all of the objects and, sometimes as you drag, you’ll be able to see around and behind some objects as they move out of the way, like you are moving inside a 3D space.  I’ve never played a game in this genre with scenes quite like these.  Each day you’ll get energy to use on the hidden object scenes.  Once your energy is gone, you’ll have to come back later when the supply has refilled to play some more.  After each scene, you’ll have the choice to spend a little extra of your precious energy to spin the bonus reward spinner, and get extra experience, coins, or gold.  Frequent play has it’s benefits too, as each consecutive day you log into the game, you’ll get an increasing amount of daily reward just for returning.  Of course, you can also purchase any of the commodities with real cash too, if you can’t wait to earn them in the game.  The gold especially might be something you want to purchase, as it is the least frequently awarded resource, and some of the cooler decorations can only be bought with gold.

You’ll give the manor a name when you first start to play, but the house itself isn’t customizable.  What you will be building onto is the land around the house.  You’ll expand the property into the surrounding wooded areas, revealing some desolated out buildings in some parts, and placing all sorts of odd and spooky objects on the grounds once the area is cleared.  Some items are just cool looking, but some are extra special and transform when day turns into night.  You’ll have the ability to switch from day to night whenever you want, with the click of an icon, and watch the entire property change.  It’s pretty fun to see the normal looking bench you just placed outside the front door suddenly gain a ghostly inhabitant when night falls, or see a skeletal hand reaching out of a previously sealed tombstone.  Each piece of décor you buy will grant you juju, so the more stuff you place, the faster you’ll unlock new scenes.  In addition to decorations, you can add people to your property, which will stroll around wherever you’ve placed a path.  They add some life and movement to your property as well as juju.  To earn even more coins, juju, and even extra energy, you can add neighbors to your profile.  Unlike other social games, you don’t even have to know your neighbors.  You can access the worldwide network of players and add anyone you want.  Visit their manors and play special blitz scenes for bonus rewards.  Keep your eyes open for trophies that you’re awarded when completing certain goals, like changing from day to night a certain number of times, or adding a certain number of neighbors.  You’ll get experience, coins, and juju from these trophies when you complete and collect them. 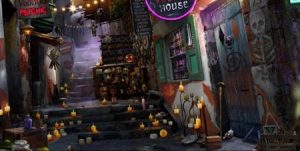 This is definitely one of the more fun hidden object titles that I’ve played, and has kept me coming back for a great number of days.  It’s quite cool to see your manor developing and gaining a life of it’s own after dark.  The way the hidden object scenes move in layers is awesome, and lends a unique and dynamic aspect to the game.  The social element is helpful when it comes to gaining coins and other rewards.  I actually like the fact that you have a limited amount of energy that you can use at one time.  This will keep you from sitting at the computer and playing this game for hours on end.  Of course, you can also take this game on the go if you want, if you have a handy iOS device.  Simply log into Dark Manor using Facebook and you can pick up your game at the same spot on your mobile iOS device as you left off on your PC, to keep the fun going even on the move.  Check out this title, for the unbeatable price of FREE, and see how fast you can build your spooky manor.