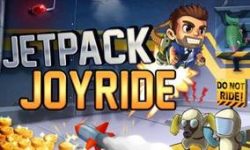 Jetpack Joyride is a free app for both iOS and Android, put out by Halfbrick Studios, the same creative geniuses to bring you Fruit Ninja.  The iOS app has been out for almost a year, but the Android app is brand new.  I downloaded this app for my Android tablet, and for the next 2 days couldn’t put it down.  The game is fairly simple, but will provide you with many hours of addictive fun.  You play as the rugged action hero Barry Steakfries, as he breaks into a top-secret research facility to discover all sorts of technology and gadgets.  You control his Machine Gun Jetpack as he zooms through the side-scrolling lab, collecting coins, dodging dangers like lasers and missiles, and chasing the hoard of scientists scurrying away from him on the ground.  Earn achievements, best your own score or those of your online friends, and unlock cool new jetpacks and outfits for Barry.  I challenge anyone to play this game and not instantly love it.

The controls are super simple.  Just touch the screen to make Barry’s jetpack take him higher, and lift you finger to make it lower him back to the ground.  You can tap to raise him only a little, or hold you finger down to ascend faster and stay close to the ceiling.  You’ll have to keep you reflexes sharp to zoom up and down when needed, and also perfect the art of keeping Barry at a consistent level in the air to navigate some of the more difficult areas.  Barry automatically continues to move forward, so all you need to worry about is guiding him up and down.  You’ll need to stay alert, and always have your finger at the ready, because you never know where the next danger or reward will come from.  As you progress through the lab, there will be a running count of how many meters you’ve covered, which acts as your score for the round.  When you pass your personal best distance, there will be a helpful signpost on the ground to mark your progress.  The further you travel, the faster Barry flies, so the more and more challenging the game becomes.  If you want to take on specific challenges, there are achievements that you can level up in, which are presented as missions before each round.  These missions could be to use a certain vehicle a number of times, or get to a certain distance without collecting any coins, or other stranger tasks, like high-fiving a number of scientists as you pass them.  As you finish missions, you’ll receive bonus rewards.

As for the dangers, these consist of lasers, energy fields, and guided missiles.  As you progress through the laboratory, these dangers get more advanced.  The energy fields will rotate, the lasers will form patterns to try to trap you between them, and the guided missiles will become more numerous.  If you hit any one of these things, Barry dies and the game is over.  The rewards consist of coins, spin tokens, and vehicle boosts.  The coins are numerous, and scattered throughout the lab.  You can use these coins in The Stash menu and buy power ups, clothing, hairstyles, cool new jetpacks, upgrades to vehicles, and more.  The spin tokens will give you free spins in the prize slot machine, which you are taken to automatically at the end of each game, where you can win a variety of bonuses.  Some of these bonuses will be different intensities of explosions that will be applied immediately to the round that just finished, to launch Barry’s dead body a little, or a lot, further down the lab, giving you a few more meters and boosting your score.  Some others, like the 750-meter head start, or the double coins, will be applied to your very next round.  The vehicle boosts are icons that you must fly into throughout the lab, to temporarily give Barry an awesome ride.  A few of these vehicles are an anti-gravity suit, a motorcycle, a robotic jumping thing, and even a mechanical dragon!  You’ll control these vehicles just like the jetpack, and be able to use them until you hit one of the obstacles, like the energy fields.  This will destroy the vehicle, but it won’t kill Barry, so it’s almost like getting a second life.

Jetpack Joyride is so full of fun, you’ll love it the instant Barry first breaks through the laboratory wall and flies into your life.  The graphics are great and the soundtrack fits perfectly with the action.  The sound effects are fantastic too, from the machine gun bursts of Barry’s first jetpack, to the pounding of his feet on the ground, to the sinister sizzling of the energy fields.  With missions, awesome stuff to buy, and the thrill of beating your own and your friends’ scores, this game will keep you engaged for a very long time.  Since it’s launch on iOS last year, there have been content updates, so Android users should keep an eye out for updates to their new app in the future.  You can get the iOS version at the Apple App Store, and the Android version at the Amazon App Store.  The Android version is currently for US users only, but that will likely change in the future.  For those of you without mobile devices, a version of the game is even playable on Facebook.