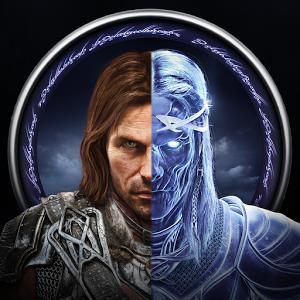 Middle-earth: Shadow of War is the title of both a PC/console game, and a free-to-play mobile variant, both released by Warner Bros. International Enterprises this month.  Today, I’ll be talking about the mobile version, which has very different game play than the more complex, open-world, RPG PC/console version.  The mobile title is your standard hero collection, team building, arena battle game, with some light RPG elements.  If follows the same basic story concept as the console version, so this app could be either a sort of bonus companion app to the console game, or a stand alone experience for those who aren’t investing in playing that larger title.  This app gives you the same themed environment, and excitement of stepping into a paired down version of Middle-earth, without the time commitment that the full console/PC game demands.

Let’s talk about the basic story set-up first.  Sauron’s evil Orc armies are spreading across Middle-earth, and you must build a team of Champions to defeat them all, and free the land from their blight.  You begin your journey with your main Champion, Talion, who has merged with the Wraith, Celebrimbor, the forger of the mighty Rings of Power.  Celebrimbor has forged a new set of minor rings, which can call other Champions from all over Middle-earth, to join in the fight to push back the encroaching hordes.  One by one, you battle the Orc leaders to retake cities and reclaim Middle-earth for the forces of good. 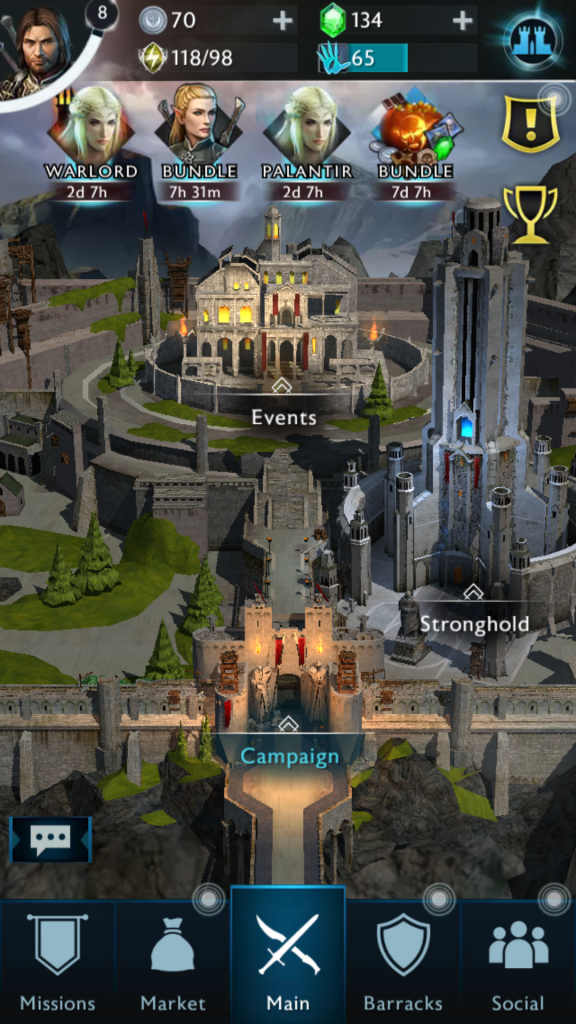 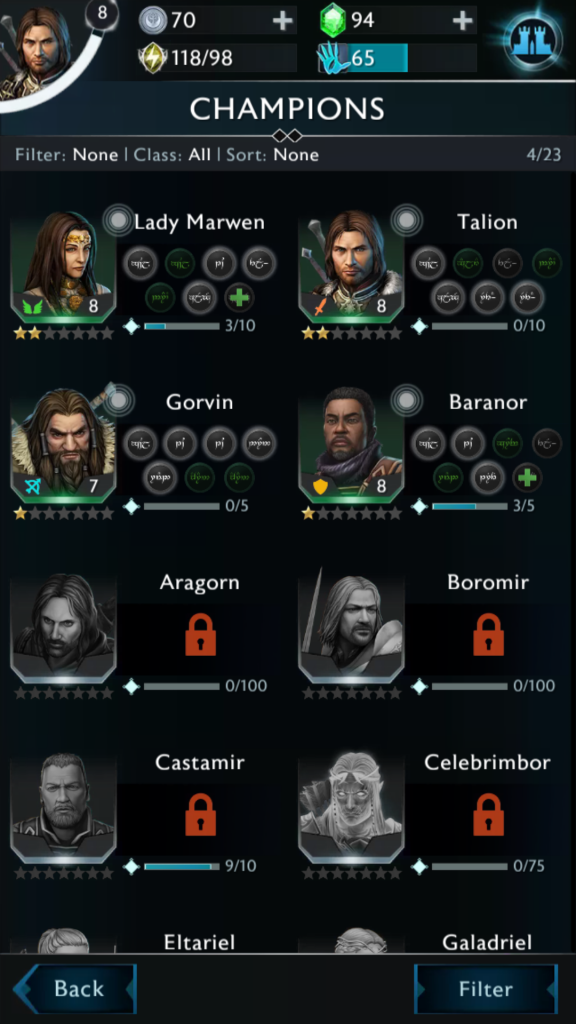 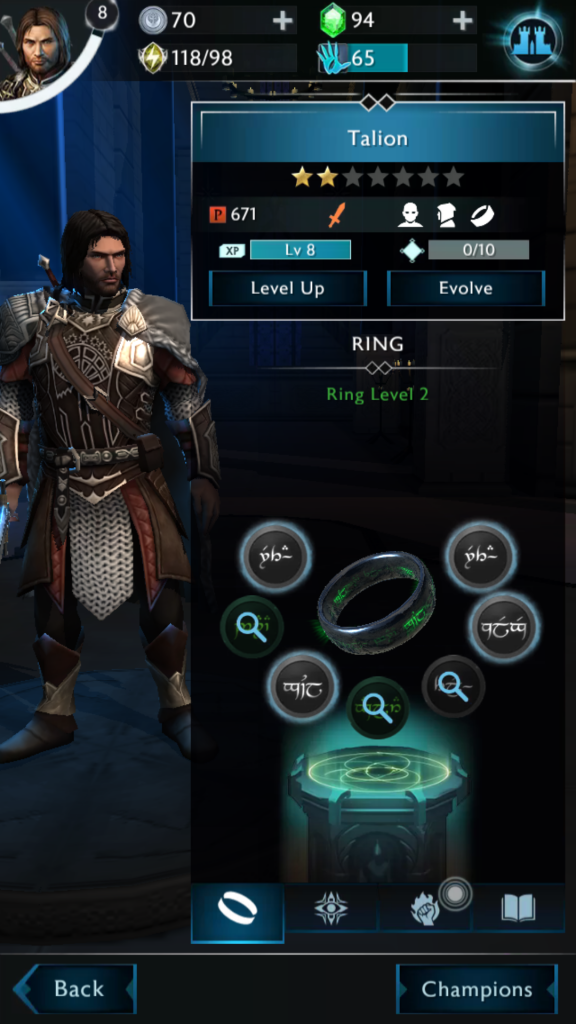 As I mentioned, when you first start the game, you’ll already have Talion in your team.  You’ll need to unlock other Champions to add to your team and make you a more formidable force.  These Champions will most often be characters original to this game, but you can also unlock premium Champions who you’ll recognize from the movies, like Gandalf and Gimli.  You can unlock them by collecting Champion Glyphs, some of which can be acquired through battle rewards, or as a free bonus every 4 hours.  Once characters are unlocked, you can use them in any battle.  You’ll need to keep upgrading them, with Runes and even more Glyphs, to make them stronger and more able to beat higher level Orcs in later battles.  There are several ways to upgrade them, each requiring the collection of various resources during battles, or as daily log in rewards.  You can Level Up with XP, Evolve them with Champion Glyphs, increase the level of their battle abilities, assign them powerful Runes, or inscribe ancient text into their Rings.  Each hero has unique special abilities, in addition to their regular attacks, which can be deployed after that character has dealt enough damage to enemies in battle.  These are powerful special maneuvers which can absolutely turn the tide of a difficult encounter, and can, of course, also be upgraded.

The battles typically consist of 3 stages, in which your heroes clash with increasingly tough adversaries at each stage.  During the Campaign battles, which are how you make progress through the basic story line, you’ll participate in a number of 3-stage battles until you meet the big boss Orc in the final battle of the series.  These are very tough creatures, and they do not fight along.  Besting them earns you special rewards, so you’ll want to go into these final battles well prepared.  When you beat a boss Orc, you’ll have the choice to Brand them or Execute them.  Executing them gives you Runes and other special resources in return, but Branding them is the choice I most often take.  When you Brand an Orc, you’ll be able to add him to your collection and call him forth to help you in future battles.  You can upgrade them and level them up just like your Champions, and they can serve as your secret weapon against other particularly difficult to beat boss Orcs.  You can also pit 2 of your Branded Orcs against each other in the Orc Dueling Pits, to increase the winner’s Glory and make him even stronger.  The losing Orc will die, but you can spend resources to resurrect him if you want to keep him. 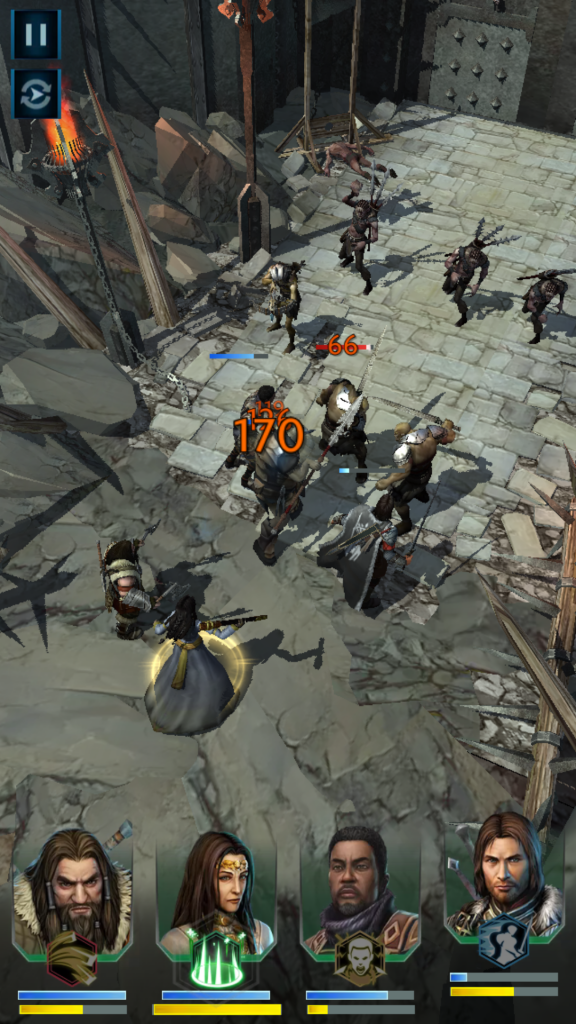 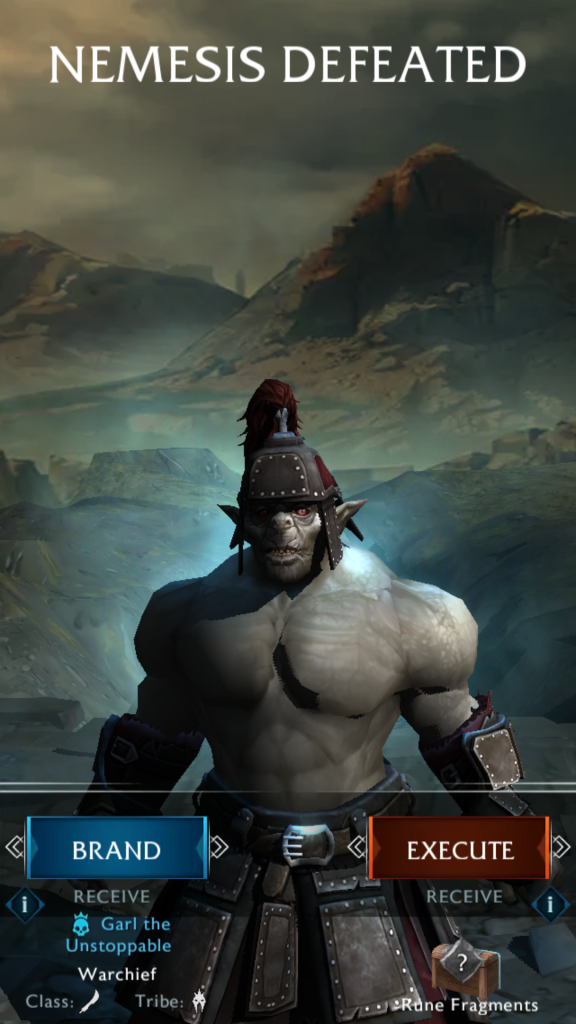 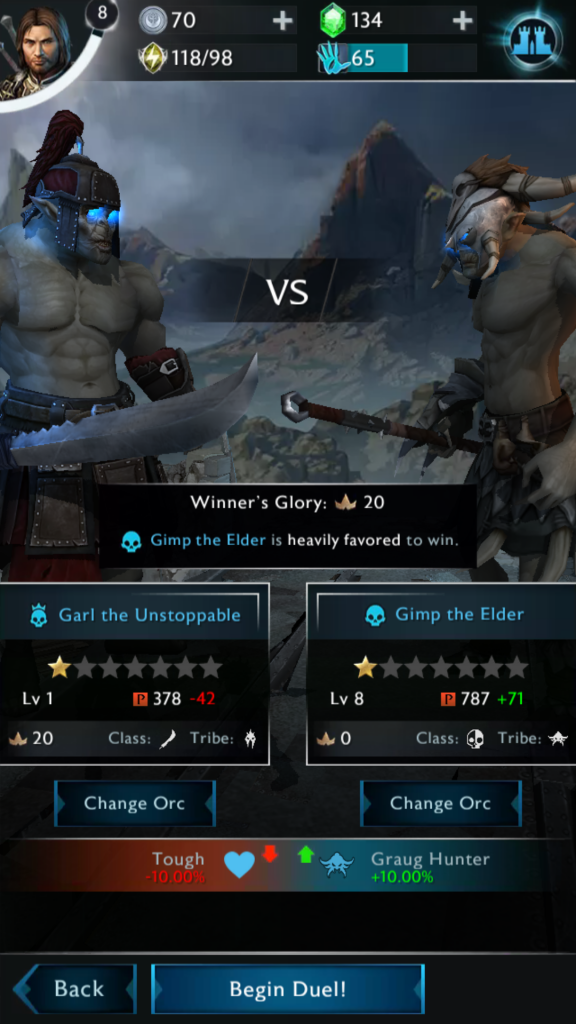 In your base camp map, you’ll find daily quests and special event battles to play, if you get bored of the regular Campaign, or are just not at a high enough level to beat your next Campaign foe yet.  You can unlock great bonus rewards if you complete all the daily challenges, as well as complete achievements.  You can also connect the game to your social media accounts, and join a Fellowship if you want to team up with other players for even more special rewards.

I had a lot of fun playing with Middle-earth: Shadow of War for mobile, and it has wet my appetite to go play the PC game of the same name.  There isn’t much in the way of variety in the game play, with each battle pretty much resembling the others, and only so much you can do to upgrade your Champions, but for the type of game it is, I’d say this title hits all the key feature points, and will satisfy your desire to battle the forces of darkness on your handheld device.  You can download it for free for either iOS or Android, and launch yourself into gritty battles with Orcs and their evil allies.