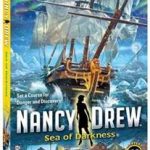 Nancy Drew: Sea of Darkness (Retail $19.99), from Her Interactive, is the 32nd title in this game series.  While we haven’t given Editor’s Choice awards to every one of these installments, this company has earned several over the years, by proving time and again that they can deliver quality adventure games for all ages.  This latest addition definitely meets the standards that I’ve come to expect from a Nancy Drew title, and provides hours of sleuthing fun.  This time around, we find Nancy traveling to the remote fishing village of Skipbrot, Iceland, to uncover the mystery of a ship’s missing captain.  Throughout the adventure, you’ll delve into the secrets of the restored Heerlijkheid, an 18th century ship that plays a central part in the town’s history.  Did Captain Magnus discover the ship’s legendary lost treasure and run away with it?  Was there foul play involved in his disappearance?  Can Nancy piece together all the clues, solve the various puzzles, and find out what happened to Magnus, and maybe even find the treasure itself?  You’ll have to play to find out.

If you’ve played any of the Nancy Drew series of games in the past, you’ll feel right at home in this new story.  The game play format and controls are consistent from past titles, and you’ll settle into them like an old familiar chair.  For new players, picking up the controls and getting into the rhythm of the game is a snap.  Search around each environment with your mouse, which changes into different icons when you can perform certain actions, like looking closely at an area, picking up an item, or talking with a suspect.  During a conversation, all of your questions and responses are listed in a dialogue box, and all you need to do is choose one for Nancy to say.  There aren’t that many characters in this small town, so finding out all of the pertinent information is just a matter of bouncing back and forth between a few people.  There are more locations to explore than there are people to speak with, and each location is beautifully rendered and detailed.  You get to explore the Heerlijkheid ship, with access to the decks, Captain’s quarters, and the hold.  The town of Skipbrot provides several cool places to investigate, like the culture center and the local restaurant.  And further out into the snowy wilderness, Captain Magnus’ cabin and the nearby ice caves play key roles in the story.  In each location there will be scattered puzzles to solve, involving either clues you’ve discovered elsewhere, or some sort of spatial or logical reasoning.  I won’t give anything away about the individual puzzles, because where’s the fun it that?  I’ll leave you the joy of discovering them yourself.  If you get stuck in a puzzle, or don’t know where to investigate next, you can always get a hint from Nancy’s notebook to point you in the right direction.

One cool aspect of the Nancy Drew games in that I always leave them with knowledge that I didn’t have before. By reading the books and other resources that Nancy finds around the scenes, each game teaches the player about the history or other aspects of the game’s theme. In this installment, I learned quite a lot of maritime information, including all the parts of a large sailing ship and types of common sailors’ knots, a bit about Icelandic lore, and even a smattering of Icelandic vocabulary. In fact, one way to earn money for Nancy to spend in the local gift shop is by playing a vocabulary game, matching the English to the Icelandic words. I wanted the fun of buying everything in the shop, so I actually spent quite a lot of time learning the vocabulary. Since these titles are geared toward all ages of gamers, I love that they make a point to enrich our minds while entertaining us with a good mystery.

Nancy Drew: Sea of Darkness presented a well-woven plot to uncover, an interesting back-story of both the characters and the town, and a set of puzzles and circumstances that were challenging, but not frustratingly difficult. If you’re a seasoned player of the Nancy Drew mysteries, I think you’ll be pleased with this entertaining title. If you’re a new player, looking for the perfect game out of the 32 to get started with, I’d highly recommend this one as a prime example of the quality of the series. Also, this is reported to be the final installment to feature Lani Minella, the talented actress who has voiced Nancy in the previous games, so this is a title that fans will not want to miss. The price point is well worth the hours of enjoyment you’ll receive from solving a mystery alongside the most famous young female detective of all time. So grab a copy and, as Her Interactive challenges you to do in the opening titles, “Dare to Play.”