Tales from Space: Mutant Blobs Attack (Retail $7.99 on Steam), from DrinkBox Studios, is a crazy side-scrolling action platform game, where you take on the roll of a ravenous mutant blob and proceed to devour everything in sight.  You, and all of your blob friends, live in a laboratory where scientists conduct all sorts of experiments on your kind.  In a bid for freedom, you break out of your cage and start gobbling up small laboratory objects, like dust, paper clips, test tubes, anything smaller than you.  As you eat, you grow, and as you grow, you get to explore bigger and more exciting locations.  Escaping the lab is only your first step to freedom, and possibly world domination, as the humans who once harmed you now run from the giant mutant blob who’s digesting the world.  You’ll love to be in control of the cute little green, one-eyed, spiky haired blob, and help him roll, jump, fly, and consume, while navigating creative environments and avoiding dangers great and small.  This game came out earlier this year for PlayStation Vita, but has just recently released for PC on Steam. 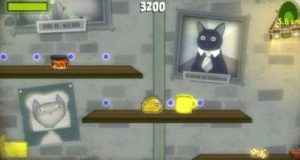 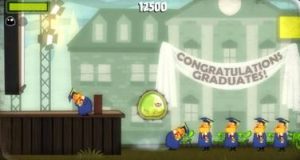 There are 24 unique levels in total, spanning 6 different environments, from the small laboratory you escape from, to the city surrounding it, all the way to outer space.  In each level, your goal is to eat enough of the loose objects lying around to grow big enough to escape that level.  There will also be a couple of your blob friends from the lab hidden within the level, and you can rescue them for extra points.  You’ll have to roll over tables and houses, squeeze through sewer pipes and under walls, and jump over holes and deadly spikes.  Other formidable dangers like laser beams and missiles will stand in your way, and sometimes even chase you down.  Luckily, you have a set of useful mutant blob skills, like telekinesis, magnetism, and jet propulsion.  Telekinesis helps you move platforms and other objects around, since blobs don’t have hands.  Magnetism allows you to either stick to, or repel off of, metallic objects like pipes, which comes in handy for scaling tall buildings, or crossing a chasm filled with the aforementioned spikes.  Your propulsion ability lets you go where no blob has gone before, and zoom through the air like a leaky balloon.  Some obstacles in a level cannot be eaten or overcome immediately, and you must eat more objects and grow bigger before you’re large enough to get past them.  Other obstacle present more of a challenge than simply needing to be big enough to chomp them down, especially as you get further into the game.  A lot of the levels have a physics puzzle aspect, and you might need to work out how to solve the puzzle over several unsuccessful attempts.  I haven’t come across anything too terribly hard though, so you won’t be tempted to punch your screen in frustration.  Sometimes you’ll get to play cool little bonus levels, like the wooden labyrinth puzzle, where you have to roll through the maze while trying to avoid falling into the holes. 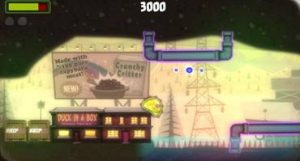 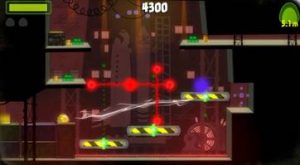 The blob you control is adorable, as are the other blobs you encounter.  The 2D graphics are well done, and there are all sorts of witty jokes and references spread throughout.  You’ll also enjoy the silly cut-scenes as you begin your adventure and as you progress through the game and the human world starts to take notice of your destructive potential.  There is really so much attention to detail in the creation of this game, and you can tell that the developers had a ton of fun.  The blob himself is a testament to this fact.  Since he is a gelatinous blob, as he eats stuff, you can see it all inside of him, floating around in the goo.  I laughed so much while playing!  Being on Steam, you get access to the worldwide leader boards, achievements, and the ability to save your game in the Cloud, so you can take your saved data on the go.  If you think this title sounds familiar, it’s actually the follow-up title to a game that came out for the PlayStation Vita last year, Tales from Space: About a Blob.  If you liked that one, you’ll love this one even more.  If you’ve never heard of it, don’t worry, you’ll love this game anyway.  Tales from Space: Mutant Blobs Attackis one of the cutest games I’ve played recently, and certainly worth the extremely affordable price.  I give it 2 thumbs up, a whole lot of stars, and all the other jazz that means it rocks!