I have always looked at the kind of gamers who will sit outside of a Gamestop overnight just to be the first to buy a new title with a substantial amount of incomprehension and wonder.  Why would people put themselves through that when they can get the same exact game a few days later without having to wait?  Then I discovered the King’s Bounty game series 2 years ago, from the awesome people at 1C Company, Katauri Interactive, and Lab 13.  Ever since I played the original game, I’ve gotten a delighted jolt of excitement whenever the next installment in the series was announced, and then waited with tingling anticipation until its release.  To date, it’s the only gaming property that can rouse in me that level of geeky devotion that will have me literally counting down the days until it comes out, and bouncing in gleeful ownership as I watch it downloading on my computer that very day.  So far, my devotion has been rewarded with a total of 3 consistently high quality games, 2 in the main series and 1 scaled down version on Facebook.  Recently, the third title in the main series came out, and once again satisfied my high expectations.  King’s Bounty: Warriors of the North (Retail $29.99) delivers a whole new chapter in the strategy/adventure/RPG saga that millions of gamers like me have come to adore.

King’s Bounty: Warriors of the North takes you back to the familiar realm of Endoria from the previous games, but into the never before seen territory of the Viking north.  You play as Olaf, the younger son of the king of the Vikings, as he travels across his homeland and abroad, battling legions of the undead to free the world from the evil taint of necromancy.  This third title brings back all the game mechanics you’ve grown accustomed to, as well as some great new features.  For those of you who’ve never played this series, let’s talk a little about the familiar features first.  As you travel around Endoria, whether by land on your warhorse, over sea in a ship, or through the air on a flying horse, you’ll meet other characters who’ll give you tasks to carry out.  These could be sprawling quests that take you hours to complete, or simple errands that take minutes.  Either way, each will earn you experience points for completion, which accumulate to level up your hero.  By leveling up, you’ll be granted rewards that allow you to improve your skills or hire more troops.  You’ll enjoy beautiful graphics and an original soundtrack, which make battling and roaming the landscapes both exciting and relaxing in their turn.  You’ll even see day turn into night as time passes over Endoria while you enjoy exploring all corners of this detailed world.  If you want to delve deep into the story behind the various lands, you can take time to hear stories from certain characters and learn much about the history of Endoria and the Viking people, as well as some of their enemies. 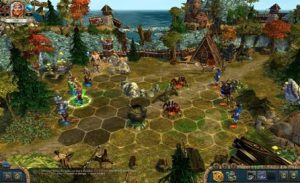 Often, you’ll come across characters who will engage you in battle.  You’ll be transported to a chessboard style arena with a honeycomb shaped grid.  You and your opponent will take turns giving orders to each of your troops until all of yours or theirs are dead.  You can build your army with various types of warriors, each with their own unique skills and fighting styles.  You’ll need to utilize some strategy here, as some troops will be better equipped to fight specific enemy opponents than others, depending on the strengths and weaknesses of both.  It helps to take time to learn which troops have the most helpful special abilities to maximize your success.  Winning battles will reward you with experience and gold.  Other items to collect along the way are magic crystals to upgrade your spells, and talent runes to add skills to each of your hero’s 3 unique skill trees of Mind, Magic, and Might.  Some skills increase your leadership ability or otherwise affect your troops, others grant you special abilities in spell casting or battle, and so on.  You’ll also pick up spell scrolls during your journey.  You can use these scrolls to cast spells during battle, or make them a permanent part of your spell book after you gain the skill to learn each of the 3 types of magic: Chaos, Order, and Distortion.  Adding them to your spell book allows you to cast them with Mana points instead of scrolls, just like you make use of your special Viking skills or your Valkyries by spending Rage points. 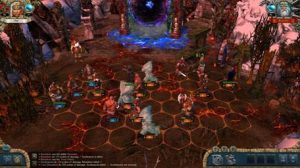 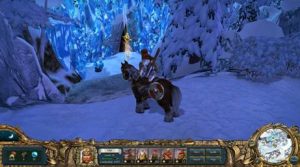 The new features unique to this installment will keep things fresh for returning players.  At the beginning of the game, you’ll choose one of 3 classes for your hero, which will affect his fighting style, leadership and special abilities, and how he’s treated by other characters.  These classes are Skald, Viking, or Soothsayer.  If you choose the Skald class, you’ll have access to the unique ability of chanting the songs of the Vikings before battle, granting you bonuses or plaguing your enemies with hindrances for the duration of that battle.  There are many different songs to choose from, to fit various battle scenarios.  You’ll be introduced to a whole new set of character types, like Vikings, Slingers, Soothsayers, and Berserkers.  For those of us who are used to the old variety of characters and have a select combination of troops we prefer to battle with, it might take a little while to get a handle on all of these new troops and their battle skills.  However, with a little practice, you’ll soon adjust to having Slingers instead of Archers, Soothsayers instead of Mages, and so on.  You’ll also be rewarded with a new group of helpful companions for your hero.  The Valkyries are 5 beautiful warrior women who will assist in battles once Olaf has discovered and recruited them.  As you level up each of the Valkyries, they’ll become more and more powerful in battle.  In addition to the 3 types of magic from before, this title adds a fourth, Rune Magic, which contributes both to the spells you can cast during battle and the individual defense of each of your troops.  At the beginning of a battle, each of your troops is given a certain number of Attack, Defense, and Luck runes to use at the start of their turns, which will add boosts to their actions.  Combining the new spell types, the Valkyries, and the Skald songs to all of the existing battle features, you can make your hero a more formidable warrior than ever.

There are over 60 hours of game play for you to dive into, letting you get thoroughly engrossed in the world of King’s Bounty: Warriors of the North.  That may seem like a lot but, trust me, it will still leave you wanting more.  You can get the standard edition for $29.99 or the Valhalla edition for $32.99, both on Steam and other major online retailers.  The Valhalla edition includes a special armor set to collect, which will give your hero some extra benefits when worn, high-resolution digital artwork, and several wallpapers to download.  Through Steam, you’ll be able to view leader boards, earn achievements, and access the Steam cloud.  Either edition you choose will provide you with lots of exciting adventure.  I personally expect to spend many hours in the near future thoroughly engrossed in this game, clicking away until my eyes cross and I realize it’s 4 a.m. and a world still exists outside of my computer.  Whether or not I will concede that my corneas need a rest or succumb to the temptation of one more battle is anyone’s guess.  It’s really hard to tear myself away from this game.  You can see a trailer on the official site athttp://www.kingsbountygame.com/gallery/video.  Explore the rest of the site for more detailed information on all of the features mentioned here.