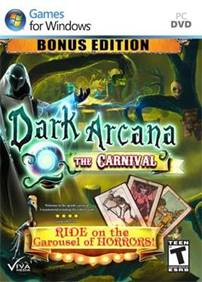 Dark Arcana: The Carnival (Retail $9.99 box/$6.99 download) is a new title in the line of hidden object games from Viva-Media.  It puts you in the role of a female detective, looking for a woman lost in a strange carnival setting, both in the real world and a dark, twisted, mirror world.  You’ll explore the same locations in both worlds, but soon discover the striking and disturbing differences between them.  The eerie soundtrack, detailed environments, and sinister plot give this game a creepy quality that will delight hidden object masters and new players alike. 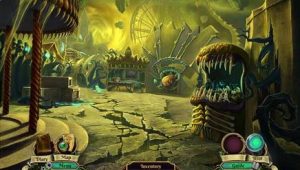 As you progress through the story, you’ll learn about the tragedy surrounding the carnival owner’s late wife, and his desperate plan to try and make things right.  Pass back and forth between the real and mirror worlds, playing through hidden object scenes as well as other mini games, unlocking 48 cool locations and solving the mystery of the missing woman.  You’ll discover that things are not quite as they seem with the carnival owner’s plans, and face off with the powerful evil mastermind behind it all.  You will get to watch interesting animated scenes along the way, each telling a new part of the story, or giving you a look at past events.  At one point, you’ll find and rescue a cute little monkey, who will stay with you for the rest of the game and help you perform certain actions that you cannot do as a human, like climb to high places, or fit in small spaces.  If you get bored of the hidden object screens, you can play a little memory game to eliminate several of the items you need to find.

As a little treat for completing the main adventure, you will be able to unlock another mini adventure, which acts as an epilogue to the story.  Step into the shoes of the ill-fated carnival owner, and tie up one last loose end.  You can also watch all of the scenes you unlocked during the game, and access the songs from the soundtrack and get some stunning wallpapers.  The only thing I can see wrong with this game is the time it takes to finish it.  It only took me 3 hours, and I wanted more when it was over.  I guess that’s a good problem to have, however, to leave your players wanting more.  Dark Arcana: The Carnival was a pleasure to play, and definitely upholds Viva-Media’s tradition of high quality hidden object titles.  Find this, and all of their other great titles, at http://www.viva-media.com. 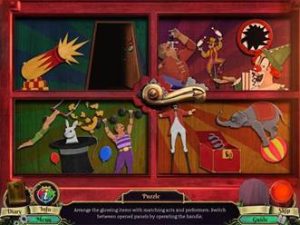