When I received an email from Caroline Weishaar, Public Relations Specialist, at TechnologyAdvice, suggesting that we publish an article about America’s first computer magazine, Datamation, it was like a blast from the past. I was an avid reader of the print version of Datamation beginning in 1967. In fact, it formed the beginning of my interest in writing about computing.

In 1977, I created a training course and guide for certified public accountants titled “A Computer in the Audit,” at a time when CPAs expected to receive accounting journals from clients but were handed 8″ floppy disks and had no idea how to read them. In 1980, when I was a member of an implementation team for a worldwide launch of a new generation of computers for the U.S. Air Force, I began a monthly journal for that project filled with facts, fiction, and humor to keep the international team informed and engaged. Then, in 1990, I began Computer Times, which was in print until 1998 when BYTE, Datamation, and Computer Times evolved into Internet-only publications, realizing much earlier than most publications that the era of computer-focused print publications needed to follow the changing technology. So, in tribute to Datamation, as the pioneer in recognizing the importance and growing interest in early computing, I happily reprint the following article by James Maquire. 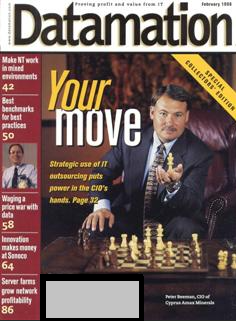 In the late 1950s, America felt a pang of concern about its technological prowess in the world. Most worrying, in October of 1957, the Soviet Union launched Sputnik, the world’s first artificial satellite – clearly pulling ahead in the space race. In the time it took this basketball-sized hunk of metal to orbit Earth, anxiety spiked in the US: why are the Russians ahead of us? We need to compete – and now.

That very same month of October 1957, something else was launched: Datamation magazine. America’s first computer magazine, the glossy pages of Datamation reported on America’s nascent but energized tech industry. Anyone reading Datamation could be reassured: American tech experts were bursting with new ideas and inventions, and were poised to help the US regain global leadership in technology.

Those early pages were filled with mainframe computers, those hulking, house-sized machines that promised super intelligence. Even more whiz-bang, Robert Noyce in 1959 created the silicon integrated circuit, enabling a computer circuit that was smaller, faster and cheaper. Datamation awarded Noyce a spot in its Hall of Fame. (Noyce, dubbed “Mayor of Silicon Valley,” later co-founded Intel.) Other computer visionaries covered by the early Datamation include Alan Turing (whose Turing Test remains valid to this day) and Grace Hopper, an early leader in computer programming.

To be clear, the launch of Datamation wasn’t only the high-minded pursuit of American best interests. Its founder, Donald Prell, was a computer hardware salesman. He looked around for someplace to advertise his wares and saw no suitable print outlets – so he revived a failing engineering magazine and called it Datamation. He created the futuristic name Datamation by combining the words data and automation. (Ironically, even in 2021 companies are keenly focused on combining data and automation, so Prell’s title was remarkably prescient.)

By the time America finally won the Space Race, when Neil Armstrong set foot on the moon in July 1969, Datamation was a dominant publication in what had become a crowded field of computer publications. But that in fact was just the first chapter in the publication’s extensive coverage of every minor and major shift in enterprise tech.

Over the decades, Datamation covered the shift from mainframes to the client server model, the proliferation of the personal computer, and how the rise of the mobile phone made computing omnipresent. Over the last decade or so, Datamation has spotlighted cloud computing as it fundamentally altered the enterprise. The publication has offered analysis of the complexities of AI and data analytics and edge computing.

The print copies of Datamation are now archived in the Library of Congress, to preserve the publication’s story of the early years of American tech history. Yet even as these pages sit quietly on microfiche, Datamation – now on the Internet, of course – remains alive and lively, offering daily in-depth analysis of the emerging technology that drives enterprise IT.

Datamation has had a remarkable run, from its print launch in 1957 to its 2021 web-based version, with interactive video and a social media feed. Yet one thing has never changed: IT decision makers continue to look to it to inform buying decisions, and to stay current on the very latest technology that’s shaping our world.

James Maguire is the Editor-in-Chief of eWEEK.com and former Editor-in-Chief of Datamation.com. He has been reporting on emerging technology for more than 15 years. He has won two ASBPE Awards of Excellence for in-depth feature articles about cloud computing and artificial intelligence. He has covered the gamut of enterprise and consumer technology and regularly communicates with leading IT newsmakers, vendors, and analysts.