I’ve always been a big fan of the classic point-and-click style adventure games, so I’m thrilled whenever a new title in that genre comes out!  I love exploring new environments, talking to NPCs, solving involved puzzles, and figuring out how to advance the plot, all while not having to worry about shooting anything that’s trying to kill me.  It’s a relaxing, intellectual genre of game, and it’ll forever remain my favorite.  The brand new Encodya ($24.99), from Assemble Entertainment, is exactly what I want from this genre, in every aspect, and I couldn’t be happier with it.

Encodya is set in Neo Berlin, in the year 2062, a cyberpunk dystopia controlled by mega-corporations, where humans and robots live side-by-side.  You play as 2 characters, swapping back and forth between them, to utilize their individual skills and knowledge.  Tina is a 9-year-old, human orphan, and SAM-53 is her huge, nanny-robot, assigned to her at birth to care for her every need.  Despite her youth, Tina is a spitfire, intelligent and resourceful, not afraid to speak her mind, and great at getting people to help her.  SAM is a gentle giant, who is kind, protective, but also a bit sassy in his observations of the world.  They live together in a make-shift rooftop encampment, scavenging for food and supplies, and trying to stay out of trouble.  When the game starts, you’ll simply be looking for things to satisfy Tina’s basic needs for the day, but you’ll soon stumble upon a larger plot thread, and be sent on a path that leads to secrets about Tina’s past, and a quest to create a better future.  I won’t reveal too much about the plot, because it’s so much more fun discovering that for yourself. 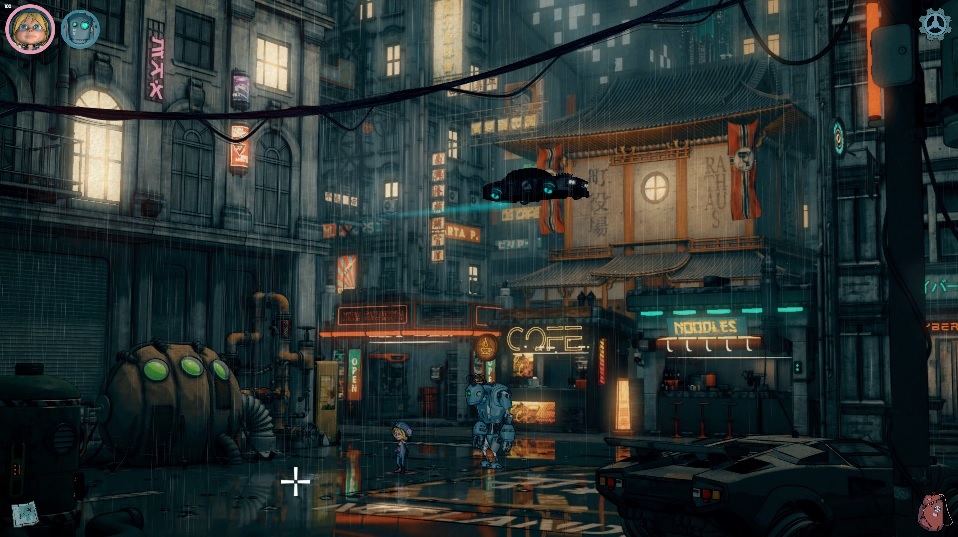 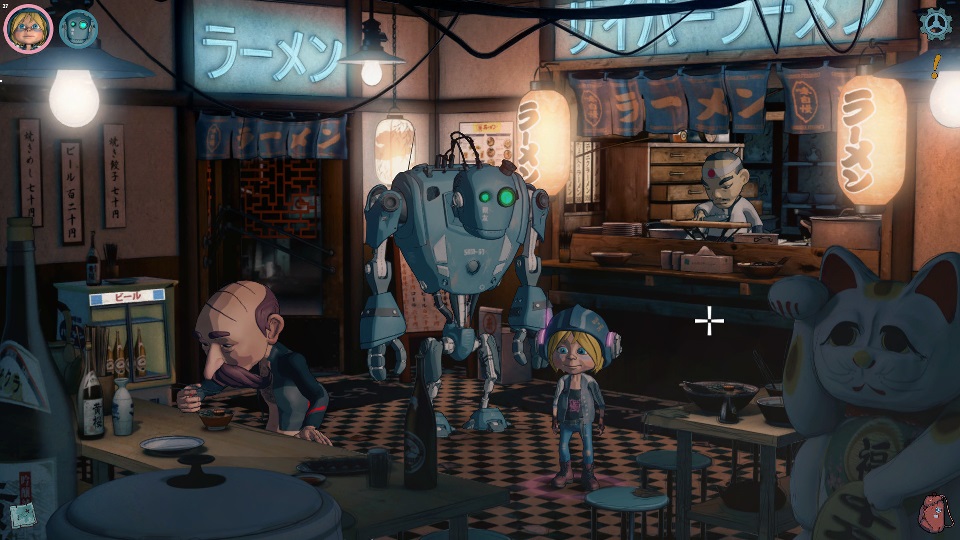 The graphics are cool, with so much awesome cyberpunk detail, and a bunch of tongue-in-cheek nods to our current world.  All the rich details, even on what would seem like insignificant backgrounds, makes this world feel fleshed out and real.  Each of the 100+ locations that you get to explore are filled with hotspots to click on, like signs, items, people, etc.  Some things you can pick up and put in your inventory for later use, while others you just get to examine closer, by listening to Tina’s and SAM’s observations.  Many times, you’ll get a different perspective of the same item from Tina and SAM, so it’s worth switching between them and clicking on everything twice.  SAM usually has more technical information about an object, while Tina provides a more experiential view, and both are often quite humorous.  Since I’m one of those adventure gamers who likes to look at everything that’s clickable, and read every book the coders allow you to open, this may have made my play-through take twice as long, but it was worth it.  In addition to the obvious items to examine and interact with, you’ll find 10 semi-hidden bonus items to click on, which will each trigger something special.  These delightful little gems have nothing to do with the plot, so you don’t need to find them, but it’s worth keeping your eye out for small, easily overlooked hotspots, because the results of clicking them are always entertaining. 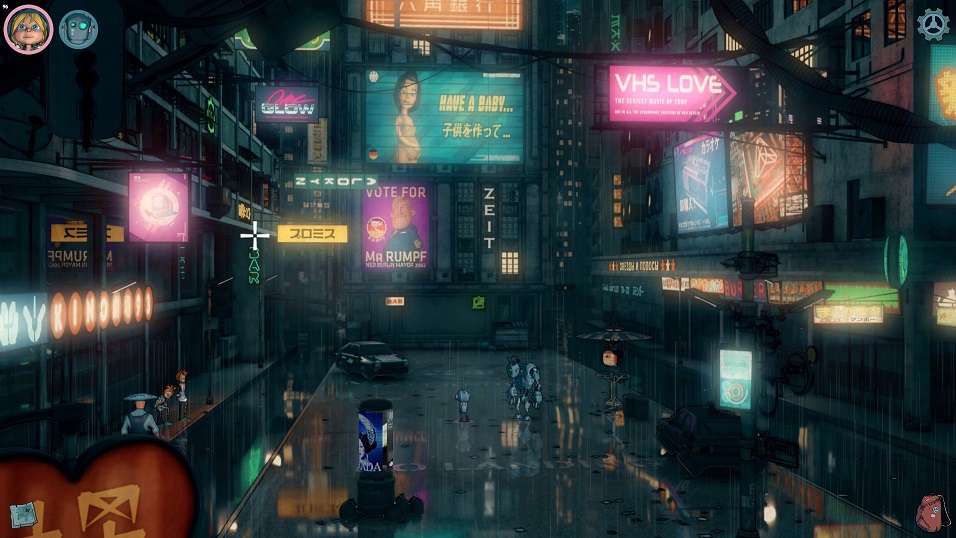 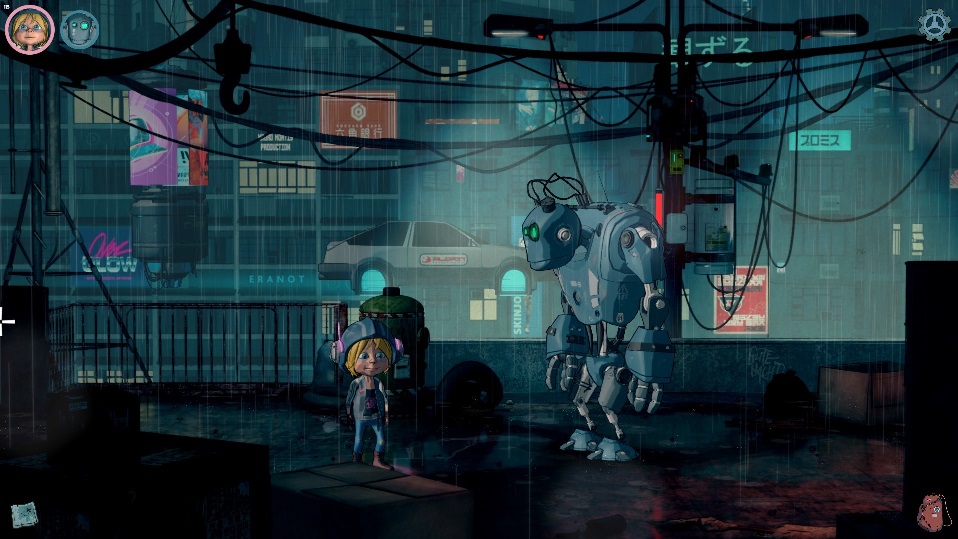 There are 34 Non-Playable Characters to interact with, and the conversations you’ll have with each are interesting and unique.  I enjoyed talking to even the most peripheral characters on the street corners, because each interaction added to the world-building, as well as the plot.  It was also interesting to hold conversations with the same characters from both of the heroes’ perspectives.  Like examining an item, sometimes you’d get a totally different reaction by speaking to someone as Tina than you would as SAM.  You’ll also get to enjoy some cut-scenes throughout game play, either in between chapters, or when you trigger an event.  Both the cut-scenes and the conversations were well acted, by professional voice actors, which made them all the more enjoyable.  The soundtrack was also an auditory treat, really creating a perfect mood for this world.  The controls were super intuitive, with the movements, menu, inventory, and all interactive elements accessible precisely how you’d want them to be.  This isn’t always the case in modern adventure games, with some developers complicating things with extra steps, or frustrating ways to access features.  This makes it clear to me that the developers of this title are actually fans of the genre themselves, and know exactly what we appreciate in an adventure game interface. 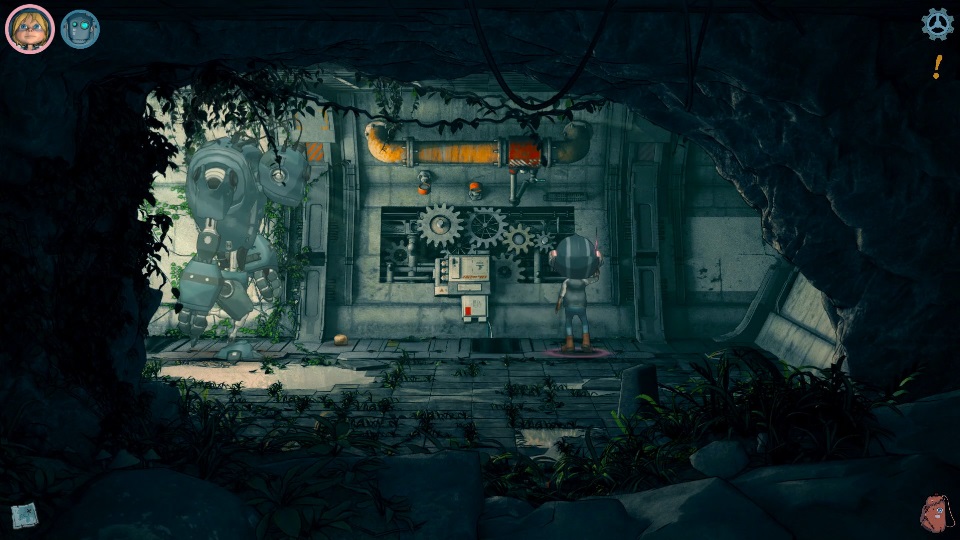 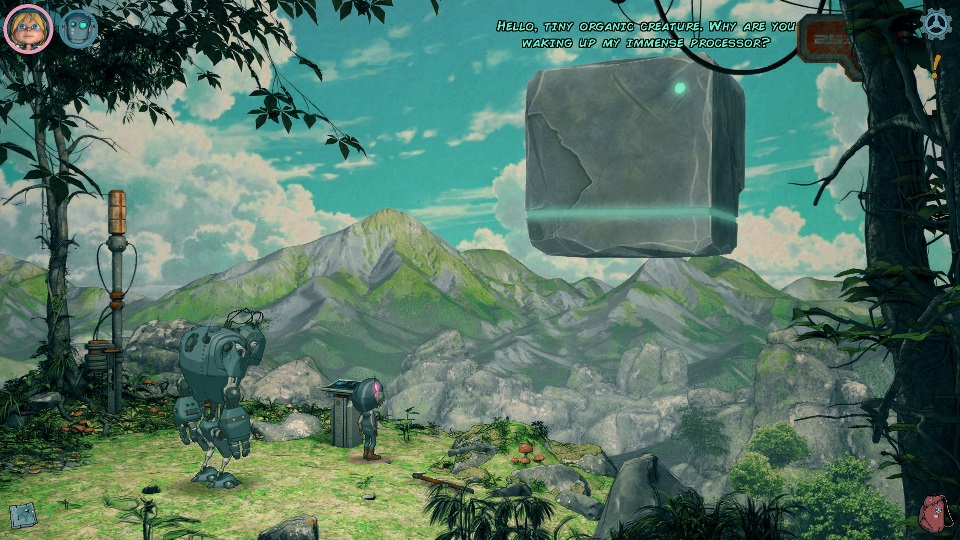 I thoroughly enjoyed the time I’ve spent inside the cyberpunk dystopia that is Encodya.  I’ve been trying to pace myself, so I don’t breeze through the entire game too quickly, but I can’t wait to get back in and help Tina and SAM complete their mission.  If you’re a fan of classic point-and-click adventures, I’d highly recommend getting this title.  Every aspect of it was satisfying, and I know you won’t be disappointed.  Encodya is available on Steam, either as a stand-alone purchase of the game ($24.99), or as a bundle ($34.99), which includes the soundtrack, an artbook, wallpapers, and a behind the scenes video on the making of the game.  If you buy this special bundle, 10% of the proceeds go to the children’s charity called Plan International, which is a pretty cool incentive to buy the bonus items.